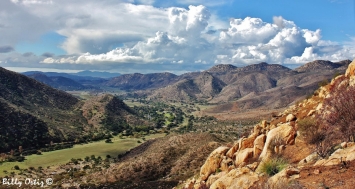 November 18, 2018 (Lakeside) – Lakeside activist Barry  A.Treahy and his wife, Jackie, have submitted a letter and petition to County Supervisors opposing a sand mining project in El Monte Valley. Treahy says the petition has been signed by a majority of property owners deemed by the County to be within the “sphere of influence” of the El Monte Nature Preserve LLC project, the ironically named sand mining endeavor.  Barry Treahy has also filed a complaint with the County Grand Jury (see attachments 1, 2, 3, 4)

Treahy contends that adding sand mining in the 1970s as an allowable land use bypassed critical notification to neighbors.  He further contends that the county’s Planning and Development Services program, which is funded entirely by developer fees without tax revenues, “opens the door to salary abuse, overcharging clients, outside influence, extortion and corruption. The obligation of a Government entity is collect taxes to fund necessary activities. The correct method to avoid those pitfalls,” Treahy’s Grand Jury complaint states.

The system has drawn criticism in the past over developers' hand-picking companies to write environmental impact reports, for instance, and a revolving door in which company employees suddenly were hired on by the County to oversee a key project or conversely, a County employee who wrote a favorable report on a project subsequently landed a cushy job with the company he'd previously overseen. Some biologists and other environmental experts have complained to ECM of pressures to slant reports to favor developers on past projects, but have been unwilling to have their names published for fear they would not be hired in the future.

Treahy  also asks the Grand Jury to weigh in on what he views as disenfranchisement with the county’s district election system for Supervisors, which means only Supervisor Dianne Jacob represents the area impacted by the project.  “Allowing those other four Supervisors a vote opens the door to collusion, corruption and disenfranchisement,” he argues.

That’s a point well taken. For example, a large solar project in Boulevard was approved by Supervisors including Dave Roberts, who had the solar manufacturer in his district and had a fundraiser for his campaign held by a lobbyist for the project’s property owner just one week after the key vote.    However, Treahy’s argument on this point runs squarely against the California Voting Rights Act, which has pushed for jurisdictions to switch to district elections instead of at-large elections on the theory that this makes it easier for protected minority groups to elect officials to represent their community’s concerns.

Various past challenges filed by jurisdictions seeking to avoid changing to district elections have failed.  The downside of district elections, as Treahy notes, is that a majority not elected to represent an area can routinely out-vote the region’s representative to push through unpopular projects.This is a problem that has long plagued  East County, where a majority of Supervisors have pushed through projects such as major wind farms near homes, large solar projects on sensitive wetlands, and projects that pose fire hazards, over the objection of Supervisor Jacob.

A complaint does not obligate the grand jury to take action, but merely provides background information that the Grand Jury may use to launch an investigation if it chooses to do so.  Sometimes a Grand Jury will take action after receiving complaints from multiple citizens over the same issue(s).

The controversy over the sand mine also highlights the problem of local communities having no binding option to prevent unpopular projects, since community planning groups have only advisory power. Lakeside’s community planning group voted against the sand mining project, which according to the environmental impact report will cause serious noise and traffic issues for the next dozen years, also increasing risk of Valley Fever spread through disturbed spores in soil, and disrupting habitat for several endangered or threatened species, among other concerns.

But planning group votes are merely advisory. The proposal next goes to the County Planning Commission, with County Supervisors ultimately having the final say, barring legal action and a court intervention on behalf of citizens.

Treahy holds out hope, however, that his efforts will bear fruit and bring justice to residents of the El Monte Valley.  He quotes President John F. Kennedy, stating, "It is amazing what you can do if you don'ot care who gets the credit."