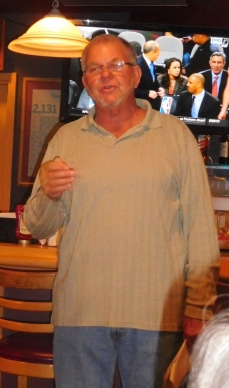 But what the project is really about is expanding flight training schools that serve mainly international clients, are causing increased noise and lead pollution, and ultimately costing jobs for American pilots, says Robert Germann, a Lakeside resident and founder of Citizens Against Gillespie Expansion.

Speaking at a monthly meeting of the East County Democratic Club at Jimmy’s Restaurant in Santee Jan.19, Germann said the five flight schools already operating at the airport are increasing the number of students who come from foreign nations eager to get new pilots certified to fly commercial aircraft.

“Many of these students come from small countries who are leasing planes (from U.S. companies) but don’t have pilots,” Germann said. “They come to Gillespie Field and other airports on the East Coast and West Coast to get certified. We’re training our replacements and putting our own pilots out of work.”

While these flight schools are making huge profits for the operators, they’re also ratcheting up the number of flights over much of East County, resulting in many lower altitude flights, as well as increased noise and lead pollution.

What is even more disturbing, Germann said, is that many of the foreign students do not speak English, and are not conversant in English, the international language used by the world’s traffic controllers. That could have disastrous results in the future, he said.

As part of an information packet he distributed Germann included pictures of a white board at one Gillespie Field flight school showing 24 different languages spoken. Among these were Russian, Farsi, Uzbek, Hindi and Chinese. A large contingent of Chinese students come to Gillespie regularly due to a large contract with a Chinese government agency, Germann said.

Many of the students “are fresh off their bicycles,” and haven’t even driven cars, but now they’re putting them in the air, he said.

Germann cited a U.S. Government Accountability Office report in 2012 that identified weaknesses in the screening and vetting of foreign flight students, and reminded his audience that two of the terrorist attackers of Sept. 11, 2001 were trained at a flight school at San Diego’s Montgomery Field. That business has since moved to Gillespie Field.

The twin-engine planes that the flight schools use were mostly built in the 1970s, and produce a great deal more noise and lead pollution, he said. The many touch and go operations in and around the airport has caused numerous complaints from residents, but ultimately, the county hasn’t done anything to rectify the problem, Germann said.

“When you get past all this, it’s all about the money,” he said.

In response to increased complaints, the airport has moved the flight patterns for the training from areas such Fletcher Hills and El Cajon to Santee and Lakeside, Germann said.

The increased lead pollution from the leaded fuel these planes emit also cause severe health problems although the effects may not become evident for years. He compared the problems to the long term impacts on U.S. soldiers from Agent Orange, a burning chemical used in the Vietnam War.

Despite all the problems that come with increased flights at hundreds of small, general aviation airports, both the Federal Aviation Administration and the county continue to support expanding these facilities because these entities are intent on generating revenue.

“They are so hard up they are willing to do anything,” Germann said. “So you’re going to have more planes, more helicopters up in the air.”

Leaded Avgas is being phased out much like the leaded gasoline for vehicles was. It will take some time.
Relax Mr. Germann, El Cajon isn't being invaded.