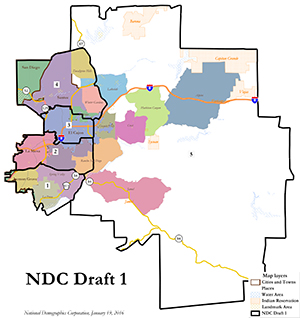 April 18, 2016 (Lakeside) - A public hearing was conducted April 11 in Lakeside to inform the public and let them voice their opinions for the by-trustee area election for GUHSD.  The hearing was held by the County Office of Education’s Committee on School District reorganization, which later approved the redistricting plan and map at its April 13 meeting. (http://www.eastcountymagazine.org/county-approves-guhsd-shift-trustee-districts)

There were 10 speakers in Lakeside, most of whom were against.

Kathleen Hedberg, board member of Helix Water District, presented her views as an individual and resident. She questioned the criteria for establishment of the trustee areas, stating that her research indicated “maps were not drawn in accordance with the Board Resolution No. 2016-22, which was signed and agreed by the whole board on January 14, 2016. Specifically, Number 9, states "The boundaries of the trustee areas may avoid the 'pairing' of incumbents in the same trustee area insofar as this does not conflict with the constitution and laws of the State of California and the United States.”

The board’s map paired Trustees Priscilla Schreiber and Rob Shield, but due to Schreiber’s term ending two years before Shield’s, she will be off the board under the GUHSD plan.

During the February 25, 2016, Hedberg noted, “Trustee Schreiber asked the demographers if they attempted to draw a map with each Trustee in separate divisions. They had said that they had not. I asked if they looked at Precinct areas and they said they had not. The development of these maps are clearly in violation of the specification of criteria to guide the establishment of trustee areas. Perhaps the demographers did not have these criteria, or know the ramifications of one Trustee losing their seat upon completion of the map.” She urged  the committee, “Go back to the drawing board, adding that it “makes sense to respect the public” who voted the board into office.

Tom Varallo, El Cajon resident, then spoke. “I have five children who have gone here in the district… This district has alienated an entire community.” He discussed the grand jury findings ignored by the GUHSD board and how Alpine hasn’t had a high school built yet. Varallo also found concern for “no Arabic study in the demography” since El Cajon has a large number of Chaldean immigrants. “The Chaldean Chamber has already publicly threatened a lawsuit.. Let’s go back to the drawing board,” he added.

Tom’s wife, Lee Stewart Varallo, shared her thoughts. She commented how her five kids have attended and graduated from Granite Hills. She also was frustrated that “the public hasn’t been given enough notice.” She heard about the redistricting on Facebook. She was opposed.

GUHSD Superintendent Ralf Swenson and Lora Durzyk, Assistant Superintendent of San Diego County Office of Education (SDCOE) later mentioned how numerous efforts have been made to reach out to the schools, parents, PTAs, and the feeder elementary school districts since January 11 earlier this year.

Twila Godley, Lakeside board member, listed many pros and cons. The pros include a smaller area, which makes it easier for someone to run a campaign in, the areas of interest would be considered, incumbents won’t run against each other, board members are more visible to the community, and there would be representation in Lemon Grove and Spring Valley “which is very important,” Godley added. The cons included leading to divisiveness since the board member would represent their district only and not the board as a whole,  which “disenfranchises [voters] from voting for other board members.” She was also concerned about the map chosen since it split Lakeside in half. Godley wanted the map to be redrawn (Dr Greg Robinson, Chair of the SDCOE committee pointed out later that the map lines were based on school attendance.

Lorraine Hamon, who used to come to GUHSD board meetings regularly, felt that redistricting would mean getting “new blood in Grossmont Union High School District.”

Sydney George, El Capitan sophomore and Associated Student Body (ASB) treasurer, along with Ruben Guzman, El Capitan junior and ASB commissioner of assemblies, were in full support. “All zones are very different and have very different needs,” Guzman said. George added, “There would be a representative from each zone” which would help meet the community’s needs.

Patti Harris, GUHSD board member and Priscilla Schreiber’s sister, praised Schreiber for all her work on the board. “Now [the board] makes no effort to protect the minority status, the female voice,” she added. “I’m asking this board to reject the map...and deny the waiver.”

Trustee Schreiber spoke next. “Our board didn’t do much inquiry of what’s going on.” Also, there was “no conversation of grouping [the board trustees] prior to their board meetings, she added.

Rhonda Turvee, Blossom Valley resident, attended the Alpine hearing. “I am not opposed to redistricting. I am opposed to the waiver. It would be detrimental to build a high school in Alpine only to have the rug pulled out from under them. The approval of the waiver "would put a board trustee in Alpine’s district, who is opposed to building a school."

Colin Campbell, resident of Alpine and supporter of an Alpine high school, concluded “What I ask is that the State Board of Education not grant the waiver.” He wants them to “recommend a public vote.” Campbell also pointed out Alpine does meet the nine criteria for unification, which Alpine citizens have requested to leave the GUHSD and unify with the adjacent Alpine Union School District so that it can build the high school. He was also frustrated that Schreiber who’s had “the highest number of votes is being unfairly gerrymandered out of her seat.”

GUHSD attorney Christopher Skinnell explained later that although Alpine is within the district right now, but if Alpine did get unified, lines would need to get redrawn yet again.  But it’s not yet a certainty whether unification will happen.

“These lines aren’t forever,” he concluded, adding that they would eventually be redrawn at the next census.

Each of the committee members then thanked everyone for coming and for providing their input.

Although the committee later approved the redistricting maps, the State Board of Education still needs to approve or deny the GUHSD board’s request for a waiver of a public vote.  Their decision is expected to take place at the state board’s May 11-12 meeting.

District residents who wish to voice their views to the California State Board of Education regarding the GUHSD request for a waiver of a public vote on redistricting may contact: