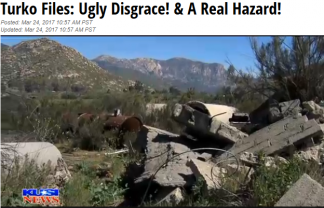 Updated March 28 with a response from Michael Beck at the Endangered Habitats Conservancy and Supervisor Dianne Jacob's office.

March 27, 2017 (Lakeside) - A big mess in Lakeside just got worse.  Someone has dumped debris illegally over the weekend along a waste heap from a former sand mining site that residents in Lakeside’s El Monte Valley were already fighting to get cleaned up.

The nonprofit acquired the land five years ago and according to the Turko Report, promised to clean up the mountain of concrete and debris left from the former sand mining operation.  But nothing has been done—and now, someone else has illegally dumped a load of even more debris.

In January, an Endangered Habitats Conservancy spokesperson told Turko from TV’s KUSI that they hoped to start cleanup in two weeks. But by late March, it remained untouched.

Director Michael Beck, in an email to East County Magazine sent March 27, stated, "These materials are not 1industrial waste'" adding, "This is concrete that has been there for over two decades. We were developing a strategy to remove it before all the publicity happened. We have not broken any “promise” to clean it up. We are working on it. We have been working with the County to insure our strategy is in compliance with any land use regulations including the reclamation plan. We have engaged the wildlife agencies to insure that we will not have biological impacts when removing the materials. We have engaged a contractor to give us a bid to remove. We have found a potential funding source to pay for it. USGS will monitor the removal to insure we don’t impact reptiles." He said his organization is also working on a "very significant restoration project on the Russian River." (View info on the Russian River project here.)

Billy Ortiz, a nature photographer and Lakeside resident, calls the debris in El Monte Valley a “disgrace to the whole community” and wants the mess cleaned up.

On Sunday, Ortiz posted new photos on Facebook showing additional debris dumped by a trailer full of what appeared to be remodeling construction waste along the new trail.  He’s asking for public help to identify the culprit. He posted a photo of the trailer’s license plate: 4JM3658.

Beck, asked about the new debris dumping,  sent this response on March 28:  "I'm aware of the illegal dumpng and we have contacted the Sheriff. We'll be working on it today."

East County Magazine contacted Supervisor Dianne Jacob’s office as well as Assemblyman Randy Voepel to ask what their offices are doing to compel cleanup of the site.

An aide to Assemblyman Voepel indicated his office will be looking into the issue.

A staffer for Supervisor Jacob responded on March 28:  "Our office reached out to county code enforcement folks this morning. Here’s the background that was shared with us: I’m told the property owner, the Endangered Habitats Conservancy, is initiating steps to clear the property in a way that will not damage or disrupt sensitive habitats and animals in the area. My understanding is that the cleanup will happen as part of an intensive reclamation plan in place on the property....Meanwhile, county code enforcement received a complaint on this issue this morning and will begin an investigation. Depending on the outcome, the county would then come up with a schedule to ensure compliance. I’m told the Sheriff’s Dept. is aware of the issue as well and would typically increase patrols as a result."

El Monte Valley is a county-designated scenic view corridor, but right now that view remains marred by mountains of debris.