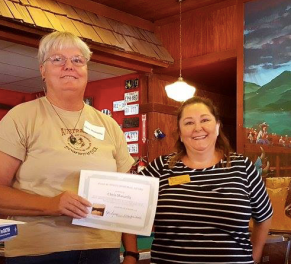 December 13, 2016 (Lakeside) -- Chris Manzella has been named Lakeside's River Park Conservancy's Volunteer Of The Year. The award given was the "The Joan Burnett Memorial Inspirational Award" named after founding volunteer Joan Burnett, who passed away in 2005.

Now a retired teacher, Manzella volunteers at the River Park and at other organizations such as the San Diego Zoo.  She is an outreach ambassador for the river Park Foundation, helping at booths at Earth Fairs, festivals, and community events around town.  She teaches children about birds and helps them to build bird feeders while promoting the River Park.

She also recruits and trains Mounted Monitors from her other family at the Wells Ranch.  In addition, she is a volunteer Gate Keepers, helping to ensure the safety of the San Diego River trail and community.

“Basically there isn't an event the River Park hosts that Chris isn't involved in. Chris is always willing to lend a hand and go beyond the call of duty, all with a smile!  We are so fortunate to have her time, talent and energy,” a press release from the River Park Conservancy states.

Other area residents received awards for their contributions as well:

If you would like to join them or learn about other volunteer opportunities at the River Park, contact Cindy Collins.

There were 75 people in attendance on December 3rd at the Volunteer Appreciation Awards Breakfast organized by Lakeside's River Park Conservancy.

The River Park thanks the event sponsors The Burnett Family Charitable Foundation and Boll Weevil Restaurant in Lakeside, who hosted this private event with a custom breakfast menu buffet.

Lakeside's River Park Conservancy is a non-profit organization founded in 2001 dedicated to preserving and restoring the biological integrity and beauty of the San Diego River while integrating recreational, educational and cultural opportunities to the community.