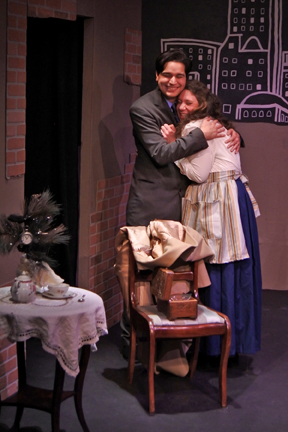 December 6, 2022 (La Mesa) - In San Diego, we do not have snow for Christmas. For many, it isn't Christmas without snow. In "The Gifts of The Magi" presented by Lamplighter's Theatre, the character City Her asks the question: how can I tell the Fourth of July from Christmas without snow? The Narrator, Willie Porter, sums up the Christmas season with his reply: people are uncharacteristically civilized.  That’s a term I fell in love with immediately because it's so apt.

George Bailey directs “The Gifts of The Magi” adapted by Randy Courts and Mark St. Germain from the short story by O Henry. The strength of this Christmas classic lies in the message. Do you love someone enough to give up your most valuable possession to buy them a gift? Is their love for you strong enough that they would do the same for you? The gift means everything to you even if you no longer possess the item intended to showcase the gift. The thought is what matters. The power of unconditional love.

Lamplighters players are doing a musical version.of the story. Christmas music brings the season to the air. Set in the early 1900s, a silhouetted New York City skyline is the perfect backdrop for this simple musical. 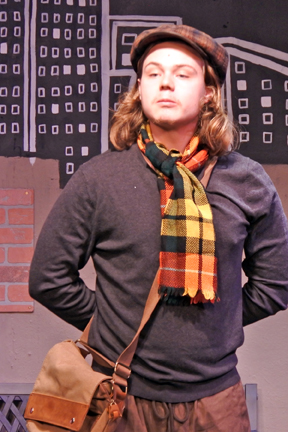 Five actors who have come to love the story portray the hustle and bustle of the holiday season and the simple, or not so simple gift of love.  Just as three wise men, known as the Magi, bestowed upon the newborn King their most precious possessions to show their love.

Willie Porter is played by Dylan Wildes-Napieraiski, a bright note in the show. His enthusiasm carries you away and his smile captivates you. He will go a long way as he continues to grow. Enrique Arana plays Jim Dillingham, the husband who had the ability to transform from a contemporary 2022 individual to someone who could have walked out of the early 1900s. Lindsey Davies plays Della Dillingham, an actress who brought her heart to the story. City Her, representing a variety of female characters, is played by the veteran Jo-Darlene Reardon, who delights us with her gifted abilities. The singer of the group, tenor Daniel Hall, has appeared in over 15 operas with San Diego Opera. Rounding out the cast is veteran Jeff Jones, who entertained us immensely playing the bum Soupy Smith.

In this hectic season remember to make time for yourself. Take breaks, embody the theme of the play and season and be uncharacteristically civilized. Help support community events, especially those displaying and showcasing their hearts in holiday shows.  Open your heart to the season. 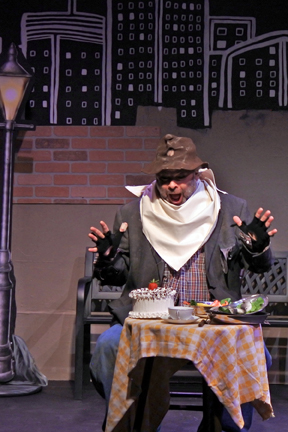 The Gifts of The Magi