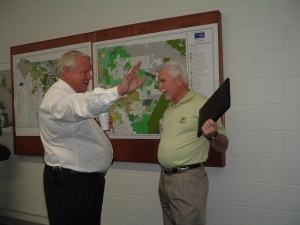 February 18, 2010 (Escondido) – On Friday, February 19, the County Planning Commission will discuss proposed changes to the County General Plan that would have a major impact on East County’s rural backcountry communities. Supporters say changes are needed to preserve the region’s rural character. Opponents call it a “land grab” by the County and argue that economic development is needed.

The meeting will be held at the DPLU planning room at 5201 Ruffin Road, San Diego, starting at 9 a.m.

Proposed changes in the county's General Plan would spell social and economic disaster for some of East County's villages and hamlets, according to the chief executive officer of Save Our Rural Economy (S.O.R.E.).

But some backcountry residents suggest that S.O.R.E. ‘s development plans would harm, not save the backcountry.

“Star Ranch is the main push behind S.O.R.E.,” Donna Tisdale, chair of the Boulevard Planning Group and Backcountry Against Dumps, told East County Magazine. “S.O.R.E.’s proposal could result in an additional 100,000 people living in the backcountry.”

County staff is “not supportive of the S.O.R.E. proposal,” added Tisdale, who has led battles to halt major projects such as Sunrise Powerlink in East County.  Tisdale said that S.O.R.E. hopes to shift 450,000 acres from rural lands designation to increased densities outside of the County Water Authority line.

S.O.R.E.'s 30 members range from farm bureaus to chambers of commerce.

Its focus is the 1.6 million acres of land east of the County Water Authority line, especially the 420,000 acres of private property subject to down-zoning proposals. 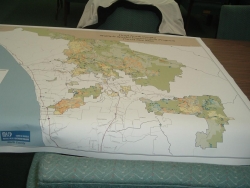 Lost, Lenac said, will be hundreds of millions of dollars annually in foregone revenue and economies of scale” available with higher densities.

And, he said, “if we do not allow some modest rural growth”, tens of thousands of residents of the Back Country will have to drive farther for basic amenities that could be provided locally.

Proposed lot sizes of 40 or 80 acres each simply are not economically viable., he said, adding “there is deep resentment over the unfair distribution of wealth.”

“The public is asleep on this thing,” Lenac said,. “It is “a gigantic land grab.”.

Horn held the two-day workshop at the San Diego County Farm Bureau offices in Escondido to talk about the proposed update of the General Plan and the proposed North County Multiple Species Conservation Program.

“I do not think a lot of you understand what they would like to do with your land,” Horn said., adding he opposes proposals that infringe on private-property rights.

However, Horn said, he will try to get as many properties exempted as possible, and that's why he wanted to hear specific concerns.

“You really are affecting business operations,” Horn said of the proposals, explaining that bank loans to keep a business going are based on the collateral – that, is, property value - that owners offer.

“I do not think that is understood by a lot of people, he said, telling the 20 property owners who turned out for each workshop “I would prefer that you come out whole,”

County officials, he said, should allow the transfer of property development rights – thereby compensating, without actually taking money out of the public coffers -, land owners who prefer to continue to farm or ranch but who do not want to lose the ultimate value of their property.

For instance, he said, the owner of 100 acres might keep them in agriculture forever but benefit from their property value by allowing it to be transferred to land near or in rural villages, which need more development density to keep them viable.

“Keep the density in rural East County,” Lenac suggested. “but keep it in the communities with infrastructure” to support it.

Otherwise, he said, 37,000 (residential) units are going to go away, and this is drastic.”

“It's really great that they are offering this (workshop),” said Jill Litschewski, who just bought property in the San Pascual Valley.

Horn said he will try to have another meeting with property owners in a few months.

Lenac wasn't the only representative of an organized group in attendance. David Shibley of Escondido spoke for Save Our Land Values (SOLV), which hopes to preserve the higher development densities allowed in previous plans.

Not everyone at the recent meeting was opposed to the plan proposal.

“It's beneficial all around,” said Niko Wizner of Valley Center after making sure that he still would be able to add a mother-in-law unit on his property.

The plan update is designed to designate land use for the next 20-30 years in all unincorporated areas of the county. The multiple-species conservation program aims to protect native habitat.

“There are no endangered species on my property that I know of - except for me,” Gerald Church, who operates a nursery at Old Highway 395 and Interstate 15, said.

Farmer Harlan Beck, with land in Pauma Valley and Valley Center, said the proposed plans call for downsizing his development rights from the current one home on four acres to one home on 20 acres.

Horn said he wants to hear from owners of particular parcels so he can try to exclude those specific properties when the two plans come before the county board for a vote.

First, he said, the government should survey all the open lands, like the Cleveland National Forest and local Indian reservations, already available for environmental protection before putting development restrictions on private property.

However, the General Plan update includes the entire county, including East County areas in the purview of Supervisor Dianne Jacob.

A Jacob representative said the supervisor does not plan a similar set of workshops.

Jeff Murphy, deputy director of the county Department of Planning and Land Use, said the General Plan update is scheduled to go before the supervisors for a vote in the fall.

He said it may be the end of the year before a public hearing on the multiple-species plan can be scheduled because it requires prior approval by the state Department of Fish and Game and the federal Fish and Wildlife Service.

Lola Sherman is a free-lance writer with many years of experience as a reporter with The San Diego Union-Tribune.