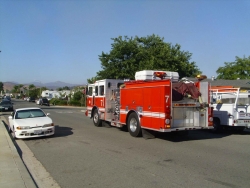 Andy Parr, Chief of Lakeside Fire District, said the fire is burning west toward San Diego but that he did not believe homes were in immediate danger. Incident Page Network reported earlier that structures are threatened on Pebble Beach Drive. An ASTREA helicopter is now on scene.