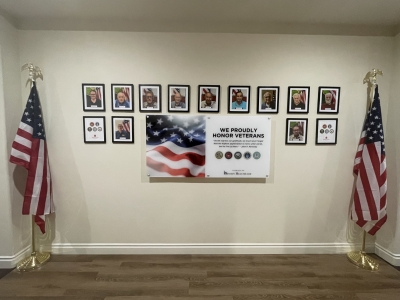 November 15, 2021 (Santee) - Residents of Lantern Crest Senior Living gathered to honor retired men and women who served in the United States Armed Forces. During the ceremony, veterans who live in the Santee community were invited to bring personal military memorabilia to display and share. The retirees, who call themselves The Lantern Crest Veterans, also wore hats emblazoned with the group’s name.

“We have a strong military family here at Lantern Crest and we take great pride in honoring our residents and local veterans throughout the year,” said Kaan Ciftci, executive director of the Santee senior living community. “In fact, our Lantern Crest residents have formed their own veterans’ group, which we support through events and programming.”

Veterans from the surrounding community joined in the activities including a tolling of the bells ceremony and a patriotic performance from The First String Band in the senior community’s newest building, The Plaza. Guests also toured the community to view each building’s Veterans Wall showcasing photos of residents who served in the United States Armed Forces.

Lantern Crest Senior Living is a locally-owned senior living community founded in 2011. Lantern Crest also operates The Lantern Crest Foundation, a 501 (C)(3) which provides comprehensive services to local seniors who may not have the financial resources to access guidance, counseling, financial assistance or other services to meet their healthcare and daily living needs.  Lantern Crest is located at 300 Lantern Crest Way, Santee, CA 92071. Learn more at lanterncrestseniorlivingsantee.com.