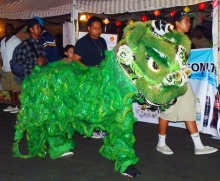 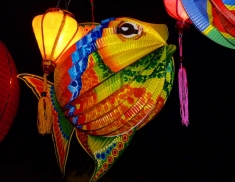 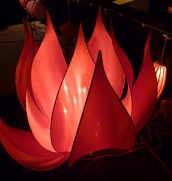 August 28, 2011 (City Heights)—A shimmering dragon marched past, trailed by followers beating cymbals and carrying glow sticks. Hundreds of lanterns glowed softly against the night sky, accentuated by the streaming lights of carnival rides. I sampled Thai chicken-on-a-stick, along with fried bananas and yams—all at the third annual Lantern Festival in City Heights. 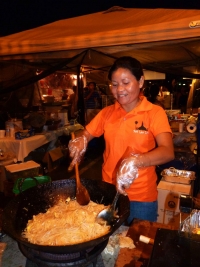 Phong Huynh, a Vietnamese refugee, longed for the joy of tasting sweet mooncakes (“Banh”) and creating a fish or dragon-shaped lantern with candle during “Tet Trung Thu” festivals in his childhood. “Whenever there’s a full moon, I close my eyes and remember the full moon lantern festival,” he told East County Magazine last year.

Huynh was part of the Little Saigon Foundation that decided to recreate a lantern festival here in San Diego, starting in 2009. The festival quickly grew too big to hold during the school year at Lincoln High School, so it was moved to summertime last year. This year, organizers hoped to attract 30,000 visitors during the three-day event, and judging from tonight’s crowd, they may well 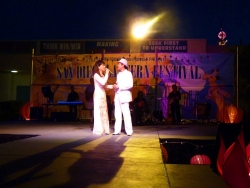 Though celebrating an Asian cultural tradition, the event had multi-cultural dimensions—such as a Spanish-language singer/guitarist who followed an Asian singing duo as part of the evening’s entertainment. There were display booths, too, though it was too dark to see what lay within by the time I arrived this evening. 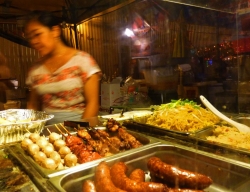 It wasn’t hard to find the food booths—just follow the pungent aromas. A woman stirred up a pot of large noodles, while some men beside her barbecued skewers of tender pork, chicken and beef. A vendor served up Lao sausage, sticky rice, Pad Thai noodles, barbecued eggs and egg rolls. Children savored shaved ice cones with sweet flavored syrups, all by the light of the lanterns lit in every rainbow hue. 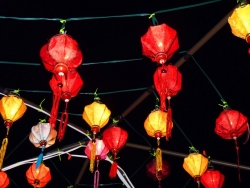 In Vietnamese culture, lanterns represent unity, bringing people together around a lantern circle while also shining a light in the darkness.  Now, a more contemporary circular symbol illuminates the night: a spinning lit-up ferris wheel. 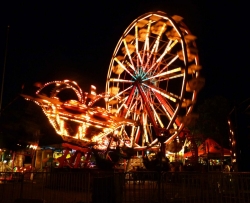 Organizers of the festival have been working to create a Little Saigon Business District in this diverse east San Diego community, where many Asian immigrants from Viet Nam, Laos, Cambodia and China have settled.

“We feel like the Little Saigon’s introduction into the community is kind of like bringing a light into the world,” Frank Vuong, co-founder of the foundation told ECM last year. “That’s the idea of the lantern -- to introduce light and to shine it into the world.”

View a video of the dragon dance procession.