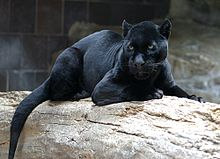 Today, we received an email from Chris and Peter Ruth, Forest Service volunteers and trail head hosts at Cedar Creek Falls.  “We now have had two reports of a black `cat-like’ animal down by the falls,” they wrote, adding that there is water in the pond though the waterfall is dry this time of year.

Multiple hikers reported seeing a “large black animal” resembling a big cat in a tree near the falls in San Diego's backcountry in Cleveland National Forest between Julian and Descanso. The sightings were reported to the ranger.  In addition, the Forest Service volunteers state, “Today, two female volunteers who hike the trail and pick up trash heard growling noises three times. With the drought, we wonder if animals are frequenting the pond to get water.”

Although there are no large black cats native to East County, there have been dozens of reported sightings in recent years, including some from credible parties such as a Border Patrol Agent, a ranger, a military officer and two friends of our news editor.  Sightings ranged as far east as Anza and Jacumba and as far west as Spring Valley; sightings in the northern areas included Mt. Laguna and eastern Poway.

Black jaguars are found in northern Mexico so it’s possible that one or more has strayed over the border.  Many described the cats as more the size of mountain lions, though there are no documented cases anywhere of black mountain lions or pumas. However, the same was said about black bobcats until very recently, when a black bobcat was killed by a vehicle in another state and the proof of their existence was confirmed.

Other possibilities include jaguarundis, smaller wild black cats found mostly in southern Mexico and central America, or exotic pets that have been rel

eased into the wild. Mistaken identity or hoaxes are also possibilities.

Other than the unconfirmed black cat sightings, the only large black animal that is known to occasionally frequent East County is the black bear, though sightings have been rare.

About a dozen black bears, which are often brown in color, not black, resided in the county about 15 years ago, mainly in Julian, Cuyamaca, Ramona and Mount Palomar.  After the 2003 Cedar fire and a known shooting of one of the bears, no more sightings were made until recently.

In February 2013, a Border Patrol camera confirmed a black bear crossing a road in In-ko-pah. In the last year, sightings were reported on Palomar Mountain and one outside the Sheriff’s office in Kearny Mesa. East County Magazine has also been advised that tracks that appear to be bear tracks have been spotted in the southeastern portion of our county within the past two years.

If you have any photos confirming a large black wildcat sighting in San Diego County, please send them to editor@eastcountymagazine.org with details on where and when the photographs were taken and any other witnesses who can confirm the sightings.

On 2/14/21 at about midnight I was driving North on the 67 from Lakeside toward Poway. On the side of the highway, on a curve near some crosses/memorials.. one of the curves that overlooks the reservoir. Very large, long and low crawling black lion was on the right side of the road. Sounds like the other eastern poway sightings!
I know this is an old thread, but we spotted a large black cat in east Poway where we live. We live on over an acre of land in a rural part of Poway. We were driving on our road at night and spotted the large black cat alongside a fence with several small dogs on the other side. It ran to the other side of the road and climbed a tree. We tried backing up and shining our lights on it to take a picture but it jumped down and ran into the opposite direction. My husband and I researched what it could be and it definitely looked like a Jaguarundi. Long tail, short ears, all black. Much larger than a domestic cat, about the size of a medium size dog (which at first we thought our Black Labrador got out), but then we saw the tail and it jumped and climbed the tree.
Since seeing a large black cat on a trail near Lake San Marcos, I've set up a trail cam on a game trail leading into the lake to see if I can photograph it... I would like to know more about the original black cat photograph sent in by reader Cathy Cathy from east Chula Vista (Eastlake). Could I get more specific information as to the dimensions of the wall, position of the camera? I've done a computer analysis of her photos, but need to know more information to calculate the size of the cat. Please email me at munnecke@gmail.com thanks.

On Sept. 12 we received this email from a reader:

My wife and I were cruising on a houseboat in Lake San Marcos last night, and heard a Coyote barking continuously...  Here is a Youtube video I made of they coyote https://www.youtube.com/watch?v=DwvnPRPG0mA

We then saw a large black cat walking up a trail.  It was dusk, and the hillside was in shadows, but all three of us identified it as black or even "jet-black"  It had a long black tail, and was about 4-5 feet head to tip, and had a cat-like slink.  I didn't get my camera out in time to shoot the cat, but attached is a photo I took of the area shortly afterwards... we saw it walk up the hill on the open dirt area to the upper center of the image.

My friend Bob Foxworth exclaimed, "There's a Puma!" and describes it as solid black, having a long, bushy tail.  A big cat like a puma, bigger than a coyote.  The shape and movement was clearly feline."

My wife Cheryl Munnecke described the sighting as a "long, low, black animal" and said "it made sense" when Bob called it a Puma.

Other neighbors report hearing the coyote barking continuously at dusk recently, which might indicate that the animal is in the area and the coyotes are warning about it.

In any case, I would enjoy connecting with anyone who is smart in these matters.  I think I could lead a tracker to the trail where we saw the animal, but don't want to go there solo.  I plan to go out on the lake this evening again with a telephoto lens.

Let me know if I can be of any assistance. 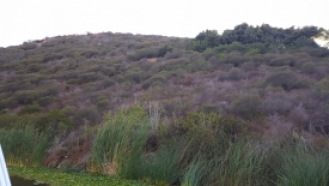 On Oct. 26, 2015 Cameron Forbes sent us an email reporting a new sighting. I spoke with Cameron after getting the email below and am advised that this sighting was in broad daylight, around noon.  If anyone else can confirm similar sightings in the Pinezanita area we'd love to hear it or better yet, send us a photo!

I came across your article (http://www.eastcountymagazine.org/black-jaguar) after doing some research trying to figure out what exactly we saw yesterday.

We camped overnight at Pinezanita campground just outside of Julian. Just as we were leaving and saying our goodbyes my son pointed out a giant black cat walking by the campground just on the other side of a barbed wire fence (coordinates 33.035185, -116.565182).