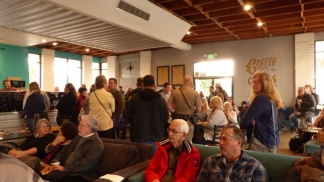 Numerous residents on Louisa Drive in unincorporated La Mesa complained about alleged drug houses  that some say has gone on for years, including syringes and other signs of drug use outside. “You’ve got to be patient,” Captain Cinnamo advised, indicating such cases require surveillance and a warrant—and if federal drug enforcement agents are involved, the Sheriff’s department’s ability to take action may be limited.   He encouraged all residents to speak with officer Matt Cook to get complaints on file and to follow up in a few weeks for updates. One resident emphasized “fear and anxiety” adding that his home has been burglarized and others have had home invasion robberies. “If it’s a big issue to you, then it’s a big issue for us,” Cinnamo pledged. 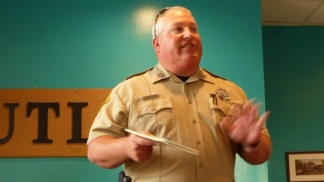 Captain Cinnamo (right) has been temporarily heading up the Rancho San Diego station since Captain Marco Garmo was put on administrative leave last month due to an ongoing federal firearms criminal investigation. Cinnamo told ECM that he anticipates leaving the post in about two weeks, when a permanent captain will be announced. The Rancho San Diego station covers an area ranging from Mt. Helix south to the border.

CHP Commander Penner said the CHP has only eight to 10 officers for a vast area that goes from the Mexican border to Julian in the north, and from San Diego State University to the Imperial Valley Line.  He said citizens can report traffic concerns by calling 619-401-2000 and follow the local CHP on social media.

The CHP has teams of officers that can be moved around the county to deal with trouble spots. Penner added that meetings with CHP and Sheriff representatives and a commanders’ lunch are ways they are improving communication and coordination.  The CHP can patrol troubled areas and when there is an obvious presence or citations “sometimes the bad guys tend to go away.” He cited a recent example where CHP arrested a motorist found to have stolen goods in the vehicle, after which law enforcement reported a drop in burglaries in the area.

Several residents voiced concerns over homeless on issues ranging from panhandling to health and safety concerns, including an encampment behind the CVS pharmacy in Casa de Oro.

“Homelessness is not a crime,” Cinnamo explained, adding that courts have tossed out some laws that formerly allowed law enforcement to arrest homeless people.

Myers clarified, “If a city is not providing a place for them to go, then you can’t criminal them for doing what a normal person would do, which is sleeping.” A person can’t be arrested for sleeping on a sidewalk or in a park on public land if the community has not provided enough shelter beds, and there are not enough anywhere in East County, officials indicated.

A homeless person can be arrested if they commit a crime, such as theft or public intoxication to the point that they cannot care for himself or herself.

Myers said even before the courts banned arrests for sleeping in public places, those arrested did not receive significant sentences and often they wound up worse off than before, having been in jail and had their belongings confiscated, “so they were more apt to remain homeless.”

Panhandling is also not illegal on most public property, though private property owners have a right to stop panhandling on their land. A deputy must first ask the panhandler to leave and can arrest them if they don’t. Penner added that panhandling is illegal on the freeway side of fencing or within 500 feet of freeway onramps. Myers added that aggressive panhandling confrontations can become criminal activities.

County Code Enforcement should be called if homeless are camped without permission on private property, such as in sheds. Those in cars must move vehicles every 72 hours or they can be cited.

Sometimes businesses don’t want to report homeless camps on their property,  Myers said, because they could face costly Hazmat cleanup costs that the property owner must pay for

A resident voice concerns over health risks. “We don’t want a Hepatitis A outbreak” she said, or a typhus outbreak such as L.A. is now experiencing tied to homelessness.  She noted that there are no bathrooms or hand-washing stations in the Casa de Oro area. 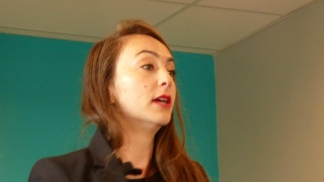 “I moved here in 1992 and this was a perfect place,” one local resident said, adding that with rising homelessness, it is now “not safe for kids walking to school.”  She asked, “I want to know where our tax dollars are going to get help for the homeless….We are all about a paycheck away from being on the streets.”

The D.A.’s representative said resources to help the homeless are available by calling 211 or visiting www.ECAssist.org, a site started by the East County Homeless Task Force.

The resident noted that homeless people “don’t have access to electronic stuff.”  Cinnamo said officers do provide handouts with resources to homeless people and help those willing to accept help find places to stay or help accessing services such as healthcare, Social Security and drug treatment. “The problem is we can’t force people to take this help,” he noted, adding that some don’t want to go to shelters because they can’t bring their pets and in some cases, must give up belongings.

The City of San Diego has built a storage facility for homeless people to check in belongings in lockers, which Cinnamo said is an “innovative” solution but one that many people don’t want in their backyard. The reality however is that the homeless increasingly are in communities’ public places due to a rise in homeless and changes in the laws.  The City of San Diego has been sued and homeless advocates have won. Cinnamo noted that often there is no one advocating for “those who are impacted” by the homeless in their communities.

Myers mentioned that the county has a large sum of money allocated to help the homeless and is accepting bids such as from nonprofits to fill those needs. Those interested can check with Supervisor Dianne Jacob’s office.

The D.A.’s office has several programs to help homeless people get off the streets “For those who are doing well, they can expunge their record” of homeless-related crimes, she said. Drug court is available for those who want treatment to “come out in a better spot” instead of going to prison.   A homeless person who has been arrested may also qualify for Behavioral Health Court if they have mental health problems. She says prosecution isn’t the answer to homelessness, but rather, “It has to be a multi-pronged approach.”

Another resident asked about trespassing.  If a no trespass order has been obtained, a person can be arrested for trespassing if they don’t have a legitimate reason for being at the property, such as visiting friends or family in a condo complex.

Some residents offered praise.  “I’d like to give the Sheriff’s Department a shout-out,” one resident said. “Every time I’ve called, they responded quickly, within 30 minutes.”

A Dictionary Hill resident in Spring Valley voiced worries over people who have been cutting through barriers to access a county present on top of the hill, including on the 4th of July, posing a fire danger from illegal fireworks.  Cinnamo promised to raise the issue in an upcoming meeting with County Parks and Recreation.

Some complained of illegal parking and speeding, including near several schools.  Penner explained that fire departments don’t like speed bumps that slow down engine responses, but added enforcement of speed laws could help.

ECM editor Miriam Raftery asked about faster notification  and signage warning when there are closures of Highway 94 between Rancho San Diego and Potrero, through the Jamul area due to flooding or accidents.  Penner said the CHP sends Sig Alerts and is looking to partner with community social media groups to get the word out faster.

A resident asked about cracking down on illegal marijuana dispensaries.  Officials explained that this is a complex and long-term process Cinnamo said, “Most of these are all about making money and they make huge sums of it, and use that money to fight us” in court  Prop 64 left a lot of details to iron out, though the Sheriff’s office has succeeded in closing some dispensaries down.

A woman who said she is immune compromised said when she sees health hazards around a business, such as waste from the homeless or drug users, “I don’t go there anymore.”

Cinnamo emphasized that “squeaky wheels” are often needed to get eyesores cleaned up. He cited an example of a citizen who took photos of an overflowing dumpster that got County Code enforcement to take action.  He suggested citizens let businesses know if they are upset about something on their property. 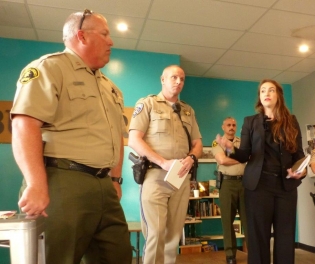 A man with Casa de Oro Alliance announced that the citizens’ group meets monthly, with the next meeting on Thurs. March 21 at Faith Chapel.  You can find the Casa de Oro Alliance, a citizens’ group, at www.CasaDeOroAlliance.org or on Facebook “Good things are in the making,” he said, adding that the county is creating a specific plan for Casa de Oro that will deal with businesses  and signage in the area over the next two years through a $2 million grant.

Barry Jantz with Stop Cottonwood Sand Mine introduced himself and said people can go to their website, www.StopCottonwoodSandMine.org to sign up for more information or get involved. He noted that the project, if built, would impact traffic in the area.

Penner spoke about driving under the influence of drugs and alcohol, the biggest problem CHP deals with.   CHP now has more officers trained to spot impaired drivers and a DUI task force where officers can team up and be moved around the county.

Myers mentioned a trafficking task force run by the U.S. Department of Justice. The D.A.’s office is also working to combat human trafficking in our region and there is “lots of interagency cooperation.”

A resident asked about body cameras.  All uniformed Sheriff’s deputies on patrol are now required to wear them. There are rules on when they must be turned on or off, and all footage is preserved as evidence.  The CHP has video in all patrol cars and the camera must be on for all public contact. Penner said CHP wants to have body cameras too but with 7,000 officers statewide it’s costly; there is a pilot program now in Oakland and Stockton.  Myers said storage costs for massive amounts of body cam videos is a problem; one crime scene could have footage from several officers body cameras running for hours.

Within the Rancho San Diego (RSD) Command are the Rancho San Diego Station, and the Lemon Grove and Imperial Beach Substations. The Rancho San Diego Command has a population of about 190,300 and covers approximately 150 square miles. Covering the two contract cities, as well as all the unincorporated areas from the international border, north to Mt. Helix and east to the Cleveland National Forrest, the RSD Command provides law enforcement services to a variety of communities, from urban to rural.

Volunteers are encouraged to sign up to help the department with:

▪  Visit the homebound (You Are Not Alone –YANA)