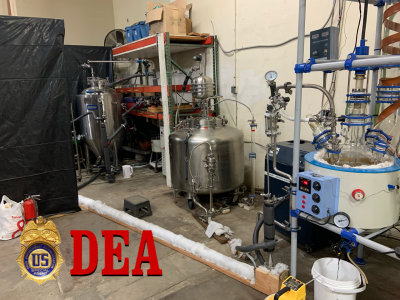 One man, whose name is not being released at this time due to the ongoing investigation, was arrested on states charges of manufacturing a controlled substance.

Hexane is a highly flammable liquid and its vapors can be explosive. A mere spark of static electricity can ignite an entire room. This quantity of hexane could have caused extensive damage to neighboring businesses, had there been an explosion. These types of extraction operations pose an extreme risk to public safety. 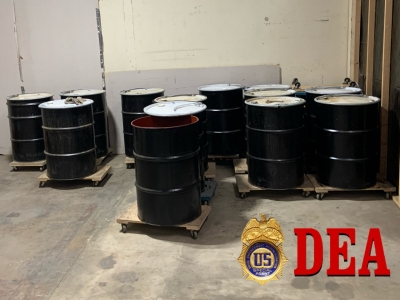 Extraction is the process of removing THC, the active ingredient in marijuana, from marijuana plant material using a solvent. The final product, a concentrated oil, can be up to 90% pure. Hash oil is often consumed in e-cigarettes and vaporizers, found in edible products like cookies, brownies and gummy candies; topicals/lotions, tinctures, capsules and patches. If not properly disposed, the toxic waste produced from these labs can cause environmental destruction, such as contamination of soil and the ground water supply.

“Due to the flammable solvents utilized in the marijuana extraction process, these types of laboratories pose an inherent threat to public safety,” said DEA Acting Special Agent in Charge Shelly S. Howe. “The DEA and our partnering law enforcement agencies are committed to ensuring the safety of the public by dismantling dangerous labs such as this one.”