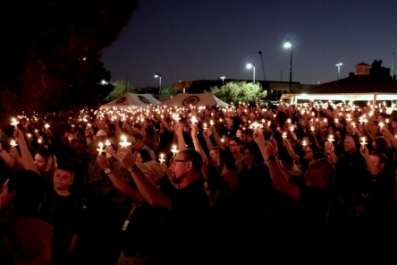 October 6, 2017 (Las Vegas) – While the families of 500 people wounded and 58 killed by a  mass-shooter Sunday in  Las Vegas  mourn the loss of their loved ones, Congress is weighing measures to ban ‘bump stocks’, which the Las Vegas Police Department confirms were used by mass shooter Stephen Paddock.

But while some legislators resist even this modest proposal or any limits on what they view as 2nd Amendment rights,  many victims of deadly shootings are saying gun restrictions need to go further to protect public safety.

California’s Democratic Senator Dianne Feinstein  has introduced a bill to ban bump stocks, after revealing that her daughter nearly attended the country music concert where Paddock fired thousands of rounds from a 32nd story hotel room in the Mandalay Bay Resort before killing himself. “"The only reason to modify a gun is to kill as many people as possible in as short a time as possible," said Feinstein, who was present when San Francisco Mayor George Moscone and Supervisor Harvey Milk were gunned down in 1978.

Feinstein calls gun stocks a “loophole” in the assault weapons ban that she authored and which is currently law.  Her bill has gained support of numerous Democrats but thus far, not Republicans. (Photo, left, Voice of America)

The National Rifle Association, which wields power in Washington D.C. and typically opposes gun control efforts, on Thursday announced, “The NRA believes that devices designed to allow semi-automatic rifles to function like fully-automatic rifles should be subject to additional regulation,” but stopped short of supporting a full ban.

In 2010, the Bureau of Alcohol, Tobacco and Firearms mistakenly concluded the devices performed “no automatic mechanical function” based on a misleading letter from the manufacturer, according to the Washington Post.

But Republican Senate Majority Leader Mitch McConnell of Kentucky told media he believed it is “completely inappropriate to politicize an event like this” and refused to take a stand on the issue.

Some Republicans have indicated they may support restricting bump stocks, including House Speaker Paul Ryan, the Washington Post has indicated.

Some believe it’s time to go farther with broader gun control measures such as banning semi-automatic weapons used in many recent mass-shootings in the U.S., tighter background checks and mental health considerations.

“The madness has to stop,” writes Dennis Moore, ECM’s book reviewer whose young sons and nephew were all victims of gun violence, including a nephew who died.  The day after the Vegas shooting, he wrote, “If ever there was a time for stricter gun control, it was after that horrific murder of 59 people in Las Vegas. Yesterday, after seeing that carnage on CNN, I called my daughter Brandy in las Vegas to see if she was alright.  Thank God she was, but we as a people and country must do something about this never ending cycle of killing throughout the country. And the NRA can’t continue to hide behind the notion that the 2nd Amendment gives them the right to do this.”

Others disagree.  Warner Recarbaren recalls his youth in Alpine, when he says  kids were allowed to bring rifles to school, checked them at the door, and would go on group hunting outings after class.  He  opposes gun control or even banning bump stocks.

“No laws or regulation would fix a deranged person like this – even in an absence of all guns today a simply milling machine can fully fabricate a weapon from readily available programs.” The answer he believes is to instill moral values in young people. “We need to fix people,” he asserts.

“I’ve been a proponent of the 2nd Amendment my entire life,” Keeter wrote on Twitter.“Until the events of last night. I cannot express how wrong I was. We actually have members of our crew with CHL licenses, and legal firearms on the bus. They were useless.”  He added that his crew had legal guns but couldn't access or fire them during the chaotic scene for fear that first responders would mistake them for the attackers. “We need gun control. RIGHT. NOW,” Keeter concludes.

The Las Vegas shooter purchased his guns legally and passed a background check. He was reportedly prescribed valium in June for anxiety, the Las Vegas Journal-Review reported earlier this week,  but had no known history of a serious mental illness diagnosis. Valium, or Diazepam, is in the drug class benzodiazepines, which studies have shown can trigger aggressive behavior and when used chronically can trigger psychotic experiences, according to www.drugabuse.com.  Though such drugs can be helpful to some people, this and other shootings in which the killer was taking psychotropic medications raises the issue of whether the increased prescription of such drugs could partly account for the rise in increasingly deadly U.S. mass shootings.

Paddock’s father was  a bank robber who once rammed federal agents with a vehicle and made it onto the FBI’s 10 Most Wanted List; the FBI had described his as a psychopath, leading to speculation that the Vegas shooter may have had a hereditary psychopathic tendency. But none of that would have prevented him from accessing guns legally.

Nevada’s lax open carry laws, however, made it far easier for him to commit the massacre.  Nevada allows open carry of guns including semi-automatic rifles.  The Las Vegas killer had dozens of guns as well as a vehicle laden with explosives.  Some have suggested limits on how many guns any individual may own could also limit carnage.

Politico reports that the U.S. has had 140 mass shootings of four or more people since 1976 (not counting family killings, shootings committed during other felonies, or law enforcement actions such as the Wounded Knee killings of Native Americans). The mass public shootings have increased in deadliness, many of them after a federal assault weapons ban expired in 2004 due to Republican opposition to its renewal.

Before 2012, no mass shooter (as defined above) ever shot more than 20 people on U.S. soil . Since then, the average has been more than 20 killed or wounded every year but one.

The U.S. is by far the worst nation on earth when it comes to the number of mass shootings. From 1983 to 2017, 119 mass shootings occurred worldwide.  Marketwatch reports that of those, 66% occurred in the U.S.  No other country accounted for more than 6%.

Australia, by contrast, has had zero mass killings since enacting strict gun control laws 20 years ago, the New York Times reports. After a deadly shooting spree, Australia initiated a weapons buy-back program that took over 20 percent of firearms out of circulation.  Moreover, a strong gun control package of legislation was pushed through not by liberals, but by conservative prime minister John Howard. Australia banned automatic and semi-automatic assault rifles as well as pump shotguns in nearly all cases, tightened licensing requirements and background checks set up a 28 day waiting period for buying guns, and created a national gun registry.

Those measures didn’t just stop mass murderers with guns.  Homicides involving guns dropped 59 percent and suicides with guns fell a whopping 65 percent – even though Australia’s population grew by 14 percent during the same 20 years.

Australia didn’t heed critics who argued that after a mass shooting wasn’t the time to discuss gun control, while emotions from such losses run deep.  Instead, its leaders took action – and saved thousands of lives.

I've said it many times: it's time to control the purchase of weapons and ammo like alcohol and tobacco. If you are a hunter or target shooter what have you got to lose? There's no such thing as privacy today, we are all in so many databases from paying taxes, registering vehicles and banking transactions.