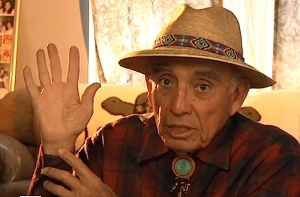 Secretaries of Interior and Energy invited to showing of "Who Are My People?"

August 6, 2013 (Las Vegas) – It is no coincidence that the Las Vegas premiere of “Who Are My People?” is on August 13. National Clean Energy Summit 6.0 takes place the same day.

The Secretary of the Interior (Sally Jewell), Secretary of Energy (Dr. Ernest Moniz), Chairman Jon Wellinghoff of the Federal Energy Regulatory Commission and Senate Majority Leader Harry Reid will be there along with an array of governors, senators, former senators, the CEO of the American Wind Association, the Director of the National Renewable Energy Laboratory, etc. will all be at the summit.

“They should be there because they need to understand the impacts of their policies,” Lundahl said. “There is giant disconnect between the polices and the people who make the policies and the impact these policies have on the Native culture, tribes and the environment.”

The events described in “Who Are My People?” have taken place over the last three years, but Lundahl says the Bureau of Land Management (BLM) is breaking the same laws as of last week. 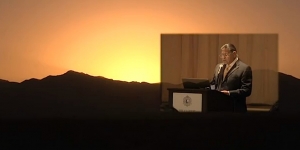 “The BLM is allowing projects to proceed on lands that are home to sensitive biological resources and species, listed as "threatened" under the United States federal Endangered Species Act, such as the Flat-Tailed Horned Lizard, and the Desert Tortoise, and central to the traditional life practices and teachings of Indian cultures, also considered “vulnerable” by the International Union for Conservation of Nature (IUCN), threatens the natural and "human environments."

The violation of Native American sacred sites, without consulting with native governments as is laid out in Section 106 of the National Historic Preservation Act of 1966, is a major theme of “Who are My People?”

“Despite our ongoing efforts, the BLM failed to engage in meaningful consultation,” said Chairman Anthony Pico of the Veijas band of Kumeyaay Indians. “Veijas and almost all Southern California tribes have stated clearly that we do not oppose alternative renewable energy development so long as the projects are compliant with Federal law and policies and so long as these projects are not at the expense of our cultural identity.” 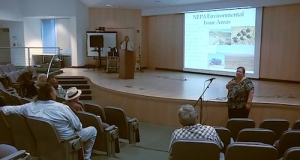 In another scene, a BLM official is shown talking to the public in the Brightsource/Rio Mesa public scoping meeting, September 2012 that included several Native American people. When she claimed to have met with the local tribes in November 2011, in a Section 106 consultation, one of the Native Americans, Chemehuevi Elder Phillip Smith asked, “What tribes did you meet with?”

Somewhat taken aback, the official, Lyn Ensler, replied, “I have enough tribes that I couldn’t say which tribes went to which meetings.”  She turned to colleague, BLM associate Field Manager, Holly Roberts, and continued, "Holly doesn't remember either."

Mojave elder Reverend Ron Van Fleet informed them he had not received any notification of the present meeting and, had it not been for a friend, would not be there.

As regards the proposed solar project, Van Fleet said, “We said no, when is it going to get through your head, do we have to fine you for a billion dollars for violating one of our cremation sites, or 10 billion dollars… all you care about is the money, maybe 10 billion dollars you would understand.”

This was not an isolated incident.

Though the Quechan were turned down, when they attempted to get an injunction to stop construction of the Ocotillo Wind Farm in Imperial Valley, the California Native American Heritage Commission subsequently recognized the entire 12,000 acre site as a sacred Native American cultural landscape and burial ground. This may have been a foregone conclusion for, though the developer’s lawyer made a presentation, the BLM failed to appear to defend its record.

In December 2010, Judge Larry Burns granted an injunction stopping work on the 709-megawatt Tessara Solar Plant, also in Imperial Valley, because the Bureau of Land Management failed to adequately consult with the Native American tribes about their burial grounds and sacred sites.

"Government agencies are not free to glide over requirements imposed by statutes (approved by Congress) and duly adopted regulations," Burns wrote in his order.

It appears that BLM may have scheduled scoping meetings for two solar projects on Native American sacred lands without sending out invitations to the Quechan, Chemehuevi or Mojave. They might not have found out if, at a July 22 California Energy Comission meeting at Palm Desert regarding BrightSource’s Palen project, the BLM project manager for all three projects, Palen, Blythe Solar, and McCoy Solar, Frank McMenimen, had not asked Alfredo Figueroa, founder of La Cuna de Aztlán Sacred Sites Protection Circle, and a litigant against several projects, if he was coming to the meetings the following day. Figueroa says the BLM claimed to have sent out registered mail, but none of the Native leaders received one. That's because the letters arrived Monday, when Figueroa, and representatives of the Chemehuevi, Mojave, and Quechan tribes were attending the Palen meeting in Palm Desert, out of town. Figueroa thinks the BLM was trying to pull a fast one. If so, it did not work. 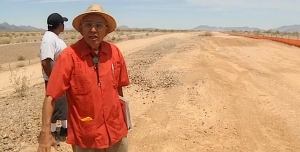 Tribal participants report that upon arrival at the Blythe City Hall, they found no exterior signage directing stakeholders to the meeting, no interior signage, and once in the room, no printed agenda. No transcriptions or recordings of the public meeting were made. And in a new wrinkle, the BLM combined two major projects into one expedited scoping meeting. Also, unlike other scoping meetings, no lunch or food was available to provide participants nutrition during the long day. Cake, however, was served.

Native leaders told the BLM, “this is not negotiable, you cannot build there.”

This brought Figueroa into conflict with the reincarnation of an old enemy. In “Who Are My People?” the Native American leader introduced viewers to the sacred sites around Blythe, California. There are scenes in which Figueroa confronts construction workers after the “True North Geoglyph” and a sacred solar image were bulldozed to make way for the Blythe Solar Project. Figueroa also founded the La Cuna de Aztlan Sacred Sites Protection Circle, which struck back with a lawsuit that helped stop three of California’s solar farms. Blythe’s original developer, Solar Millennium, went bankrupt. NextEra Energy, Inc is now planning to build a smaller development on the same site.

At one point during the scoping meeting, the Project Manager for Blythe said, “We are just going to try harder.”

To which Alfredo Figueroa responded, “We are also going to try harder.”

The next act of this drama may be played out Flamingo Library Main Stage Auditorium, Las Vegas, on August 13. On one side there are tribal leaders and an independent filmmaker who is trying to bring their plight to the public’s attention. On the other - if they come - key representatives of the solar industry and Obama administration.

It is only weeks since Secretary of the Interior Sally Jewell declared that Ivanpah Solar Generating station “is paving the way for green energy... thank you for being pioneers.” 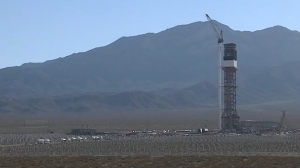 BrightSource Ivanpah, who many consider to be the flagship of the Obama administration’s solar fleet, has many ties to the administration. Robert F Kennedy Jr., whose family helped put Obama in the White House, is probably the best-known member of VantagePoint Capital Investors, one of the principal investors in BrightSource. The political connections do not end there. President Clinton’s CIA Director James Woolsey is one of VantagePoint’s former partners, a former British Foreign Secretary, David Milibrand, serves as an advisor and, prior to his resignation due to health reasons, President Obama’s Secretary of Commerce was a former Chairman of BrightSource’s Board. No wonder some suspect that political connections may have been behind the $1.6 billion loan guarantee that the Department of Energy extended BrightSource.

Lundahl tells a different side of Ivanpah’s story, the attempt Native American leaders made to stop this project from going forward.

Reverend Van Fleet asked viewers to, “Call your senators; call your governors. We want solar power, but we do not want it on pristine desert floor. Anybody who looks at the desert says, it’s just a desert. It is not. There is a lot of animals out here that need to be protected and nobody is their voice.”

It seems unlikely that Nevada residents can expect much help from Senate Majority Leader Harry Reid, host of the National Clean Energy Summit.

According to a blog called Political Party Time, Reid celebrated Ivanpah’s loan by holding a fundraiser at BrightSource’s headquarters in California. He reputedly received more campaign donations from renewable-energy sources than any other lawmaker that year and was named Solar Champion of the Year (2010).

Duke Energy, which hopes to build the Searchlight Wind Project in Reid’s hometown, both contributed to his campaign and contributed $10 million to the 2012 Democratic convention.

Reid’s son, Rory, is a partner in Lionel Sawyer & Collins, which represents Duke Energy and several other renewable-energy companies championed by Harry Reid.

Reid also fought for an extension to the Federal Wind Production Tax Credit.

It is interest to note that the Searchlight Wind Project will not be close to Reid’s home, but on the other side of town.

Some of the turbines will be 1.2 miles from Judy Bundorf’s home.

She said, “There are a few people who support the project, and are periodically trotted out for the press, but it really does not offer anything for the town because the energy generated, if the project is built, will be transmitted to Los Angeles or Las Vegas.”

Bundorf, fellow Searchlight property owner Ellen Ross, Mojave elder Rev Ron Van Fleet, the Basin and Range Watch, and Friends of Searchlight Desert and Mountains are suing the BLM and the U.S. Fish and Wildlife Service for having conducted an inadequate review of the project's impact on desert wildlife. They claim the project will “pose significant adverse harm to a wide array of sensitive and protected species...including desert tortoise, golden eagles, bald eagles, and residential and migratory birds and bats... through direct, indirect, and cumulative impacts"

The Searchlight Wind Project will also mar the view of Spirit Mountain, which has been listed on the National Registry of Historic Places since 1999 and is a sacred site for seven Native bands that reside along the Colorado River.

Some of their leaders told Bundorf that the BLM has not consulted with them in the manner specified by Section 106 (which sounds like another lawsuit in the making).

Judy Bundorf has been researching renewable-energy for the past five years and met Robert Lundahl while he was filming at Ivanpah.

She also found the location where “Who Are My People?” will be shown and invited Lundahl to Las Vegas.

After the movie, Robert Lundahl and some of the Native Leaders will hold a conversation with the audience. It could be an interesting evening, especially if Sally Jewell, Senator Reid or any of the politicians or renewable leaders take part in the discussion.