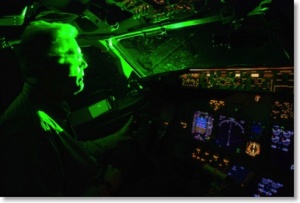 November 16, 2015 (San Diego) – In the wake of recent terror attacks in France and ISIS threats to target coalition force leaders, security is being beefed up across the U.S.  One area of potential concern is the dramatic increase in laser beams striking commercial airliners, helicopters, private jets and other air traffic.

On November 11th, just two days before the Paris massacres, 20 aircraft were hit by laser beams during flights in the U.S., Reuters reported. Such strikes are potentially lethal, as laser beams could blind pilots, or temporarily distract them during critical take-off or landing times. A laser beam, though a pinpoint of light when transmitted, fans out to become a bright bubble of pulsating light when it reaches the cockpit window.

The numbers are up nationally, too. By year’s end  we’re on pace to have 6,850 laser incidents targeting air traffic nationwide – a 176% increase over the prior year, according to Associated Press.

Recent laser strikes in San Diego include a United Airlines plane on November 9th, an American Airlines jet struck in late October inbound from Phoenix and a Sky West plane from Los Angeles that was hit on September 30th, according to news reports aired on  NBC, ABC and Fox TV in San Diego.

In March, U.S. Senator Chuck Schumer called on the Food & Drug Administration to ban green lasers, which are brighter, travel farther, and can do more damage to the eye than other laser colors. Powerful green lasers have only been on the market for a few years and are used largely in outdoor applications.

“These green lasers are the weapons of choice when it comes to taking aim at airplanes for people who are up to no good,” Schumer said, New York Daily News reported. “We have to do all we can to ground these lasers for the safety of the pilots here with me today and the passengers who depend on them.”

Though catching suspects in such cases can be challenging, some have been apprehended. New York police arrested a suspect who allegedly aimed a laser at a news helicopter; fortunately a reporter on board was able to zoom a camera lens in on the suspects to guide police. In San Diego County, a Sheriff’s helicopter targeted recently resulted in arrest of a juvenile suspect.

The FBI is offering $10,000 rewards for information leading to arrest of suspects pointing lasers.

Laser pointing devices have a range of applications including business and education venues, gaming and more. But eye damage has occurred when laser pointers were used inappropriately, such as in crowds or  at sporting events.

The website Laser pointer safety offers tips for safe use of laser devices, such as not pointing at stars, which could actually be distant aircraft. For more information you can visit www.LaserPointerSafety.com .