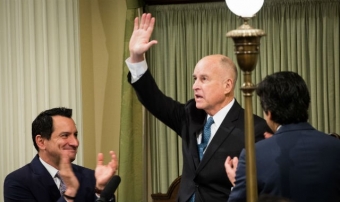 January 27, 2018 (Sacramento) -- As Gov. Jerry Brown neared the end of his last State of the State speech Thursday, he invoked a name that has become a frequent theme: August Schuckman, his own great-grandfather, who left Germany in 1849 and “sailed to America on a ship named Perseverance.”

The 79-year-old Democrat cast his ancestor’s journey—and the ship’s poetic name—as a metaphor for California in an era of natural disasters and deep rifts with the federal government. “We too will persist,” he said, “against the storms and turmoil, obstacles great and small.”

Brown, delivering his 16th such speech during an unprecedented four-term tenure as California governor, contrasted California with the direction the United States is heading under Republican President Donald Trump—touting the state’s efforts to combat climate change and its embrace of Obamacare. He reiterated his commitment to two major infrastructure projects he’s long championed: a high-speed train that would eventually connect Los Angeles and San Francisco, and a massive tunnel to move water from the north end of the state to the south. And he gave an impassioned plea for legislators to look at the big picture of California’s criminal justice system instead of passing new laws in response to crimes ripped from the headlines.

Democrats praised Brown for an optimistic speech that demonstrated the hallmarks of his leadership. Even some Republicans offered mild praise: Assembly Republican Leader Brian Dahle called Brown “one of the most conservative Democrats in this place” for his relative prudence. But he criticized the governor for signing laws, like the gas tax, that raise the cost of living in California.

What Brown didn’t mention: the fact that California has the highest poverty rate in the nation, that housing prices that have skyrocketed beyond affordability for many residents, and that the state’s tax structure exposes it to perpetual cycles of boom and bust.

Also absent were the obscure intellectual references that have studded his past speeches—although he did contrast the state’s bloated penal code with the Biblical 10 Commandments.

His also struck some themes that are vintage Jerry Brown. He cited California’s recent wildfires and mudslides and the Doomsday Clock, echoing past speeches in which he predicted environmental disaster. He advocated remedies to slow global warming—clean cars, renewable energy—that resembled ideas he espoused when he was first elected governor more than four decades ago.

“We should never forget our dependency on the natural environment and the fundamental challenges it presents to the way we live,” Brown said to his 2018 audience. “We can’t fight nature. We have to learn to get along with her.”

Yet as he looked forward for California, he also looked back at his own family history. When Brown was first sworn-in in 1975, he rarely talked about his ancestry. As the years mounted, however, he has increasingly turned to his family origin stories to illustrate his belief in California’s potential.

Now the Brown family’s California Dream is a common trope in his rhetoric. He talks about the great-grandfather on the Perseverance, the grandmother who was the youngest of eight children, the father, Pat Brown, who preceded him in the governor’s office.

Some of that reflection may be the natural consequence of age. But it also reveals a governor more assured of his own accomplishments and less fearful that he’s riding on his father’s coattails, said political scientist Sherry Bebitch Jeffe. A professor at University of Southern California, she’s been following Brown’s career since he ran for Los Angeles Community College board in 1969.

The younger Brown first moved into the Governor’s Office less than a decade after his father had moved out. During those first two terms in office, Jeffe said, Brown went to great lengths to distinguish himself from his father.

“He did not want to live in his shadow,” she said. “Jerry wanted to build his own legacy, his own philosophy of governance.”

His early speeches reflect the schism. Brown—a 37-year-old bachelor at the time, famously sleeping on a mattress on the floor of an apartment—opened his inaugural address in 1975 with a quick quip about his dad. “My father thought I wasn’t going to make it,” to become governor, he said. “But here I am.” He went on to talk about problems with environmental and land-use rules, the need to provide a better system for funding schools and farmworker rights.

For the next six years, Brown used his State of the State speeches to float ideas: developing more clean energy, building more prisons, making housing more affordable, putting a satellite into space, and overhauling the bail system. Then, as now, he acknowledged the uncertainty of the future and urged lawmakers not to spend too much.

But by the end of his first two terms, Brown’s 1982 State of the State speech reminisced about his father, his grandmother and his great-grandfather Schuckman who traveled the plains from St. Louis to Sacramento during the Gold Rush.

“Let me read to you from the diary that was kept during that trek westward,” Brown said, then recounted in detail their journey across deserts, through rivers and over mountains. He spoke of oxen dying of thirst and wagons going up in flames.

“These were men and women who matched our mountains, and in not too many years, built these walls,” Brown said. “We are bearers of that powerful tradition. It still drives our people and the hundreds from foreign who arrive in our state each day.”

Most people assumed, of course, that 1982 speech would be Brown’s final State of the State. But after serving as Democratic Party chair, Oakland mayor and attorney general, he reclaimed the governorship in 2010. In his inaugural address, Brown again read from Schuckman’s diary.

“We can only imagine what it took for August Schuckman to leave his family and home and travel across the ocean to America and then across the country—often through dangerous and hostile territory—in a wagon train. But come he did, overcoming every obstacle,” Brown said.

In 2015, Brown reflected on his father’s leadership in ways he never did in those speeches during his early years as governor.

“The issues that my father raised at his inauguration bear eerie resemblance to those we still grapple with today: discrimination; the quality of education and the challenge of recruiting and training teachers; the menace of air pollution, and its danger to our health; a realistic water program; economic development; consumer protection; and overcrowded prisons,” Brown said. “So you see, these problems, they never completely go away. They remain to challenge and elicit the best from us.”

Whatever challenges lie ahead for 2018 and beyond, Brown said on Thursday “All of us—whatever our party or philosophy—have a role in play in defending and advancing our democracy. Our forebears set the example.”

Now he’s planning retirement on the rural land in Colusa County where Schuckman settled in the 1800s. Though Brown’s upbringing is very different from most Californians, his family stories can make the austere governor more relatable, said Roger Salazar, a Democratic political consultant who works for the Legislature’s Latino Caucus.

“It’s a story that I think a lot of legislators can relate to,” Salazar. “When you look back at your familial history and the context in which they came to California, I think that’s something that we all can connect with.”