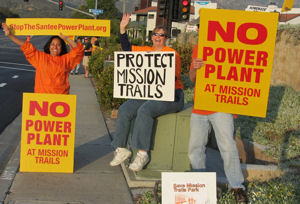 June 19, 2012 (San Diego) The San Diego City Planning Commission has received a recommendation by city staff to initiate zoning changes to pave the way for a power plant on the border of Mission Trails Regional Park. A hearing is scheduled at 9 am on Thursday, June 28, 2012 at San Diego City Hall (downtown). Your attendance at this hearing is vital so that you may submit testimony for the record and to show unified public opposition.  Complete a Public Comment slip upon arrival if you wish to speak.
Cogentrix, an indirect, wholly-owned subsidiary of The Goldman Sachs Group, Inc., initiated an application with the California Energy Commission in August 2011 in response to a request for bids from SDG&E to build a local peaker power plant at the site.
The City of San Diego and the CEC have identified conflicts due to a number of local laws and ordinances, which must be revised so the plant can be approved.  The project as proposed requires (text below taken from a letter by San Diego City Development Dept to the Applicant) these changes:
Concerned citizens are expressing strong opposition to zoning changes and the Power plant application in protection of both Mission Trails Regional Park (MTRP) and surrounding communities.
Today, June 19th is the final day to email your comments in order for the Commissioners' to review in the file on this matter.  Opponents have mobilized a letter writing campaign to tell the Planning Commission and CEC that “open space is a precious resource that should not be frittered away to developers, particularly not for heavy industry such as a power plant, which will threaten the wildlife and ecology of MTRP and the population of surrounding urban communities.”  Their sample letter is below, which may be copied and sent as a single email to all of these:
To: ESolorio@energy.state.ca.us
Cc: planningcommission@sandiego.gov; JerrySanders@sandiego.gov; anthonyyoung@sandiego.gov; CarlDeMaio@sandiego.gov;kevinfaulconer@sandiego.gov; martiemerald@sandiego.gov; SherriLightner@sandiego.gov; toddgloria@sandiego.gov; davidalvarez@sandiego.gov;loriezapf@sandiego.gov; JDale@ci.santee.ca.us; JMinto@ci.santee.ca.us; JRyan@ci.santee.ca.us; RVoepel@ci.santee.ca.us; RMcNelis@ci.santee.ca.us; dianne.jacob@sdcounty.ca.gov;  senator@boxer.senate.gov; senator@feinstein.senate.gov;assemblymember.jones@assembly.ca.gov
Subject: CEC Docket #11-AFC-03 Quail Brush Generation Project Power Plant Licensing Case
Opposition to Revised Land Use And Rezoning
As a concerned citizen(s), I/we strongly oppose a (1) MHPA Boundary Line Adjustment, (2) Community Plan Amendment of Open Space, (3) Rezoneof (RS-1-8) residential zoning to industrial zoning within the East Elliot Community Plan area, and (4) Revision of the City’s Multi-Species Conservation Program (MSCP) Subarea Plan, all of which actions are intended to facilitate the siting of a Power Plant.
Additionally, I/we respectfully request the CEC to consider the “No Project Alternative” for Docket #11-AFC-03 Quail Brush Generation Project Power Plant Licensing Case.
Respectfully,
[Your name here]