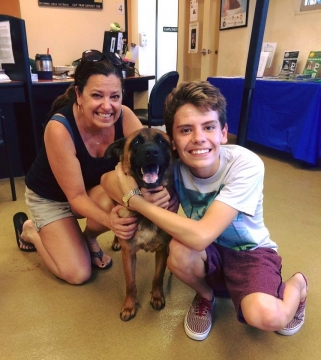 October 4, 2016 (Potrero) – “Finally! Kendrick was the last of the dogs at our shelter in Bonita which were rescued from the Border Fire in Potrero in June, “San Diego Animal Services posted on Facebook yesterday.

According to Animal Services, “The young man in the photo met Kendrick a few weeks ago and couldn't get him off his mind. His mom said if they came back on Saturday (October 1st) and Kendrick was still here, he could have him for his birthday which is this week. Kendrick hit it off with this family right away and was happy to leave with them today! His new family is going to take him on lots of hikes on the trail near their home!”

Kendrick was one of many dogs that belonged to “Barefoot” Jim and Kyrie Keefe, the couple who lost their lives in the Border Fire in Potrero.  All have now been adopted, Jim DeSousa, Deputy Director of Animal Services, confirmed today to ECM. That includes the dog known as “Little Joe,” found with burned paws by TV reporter Joe Little.

Julie Salmons, a community volunteer who helped find the bodies of the Keefes by following their dogs at the site, voiced joy in a Facebook Post at news that the dogs who have endured so much suffering now have forever homes.

She also voiced hope that this news will help “finally heal my heart,” adding, “A huge thanks to this wonderful young man. In the words of ‘Barefoot’ Jim Keefe, ‘Peace, Love, Light.’”