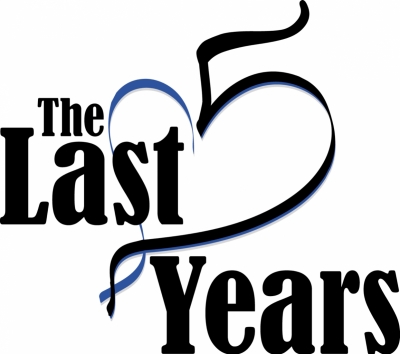 August 7, 2021 (La Mesa) - Can A broken romance be romantic? Lamplighters Theatre in La Mesa is back. They are presenting Jason Robert Brown's "The Last Five Years" directed by Teri Brown and Johnathan Sturch with Musical Director Christopher T. Miller. The play opened July 23 and runs through August 15.

The play brings a touch of romance, quirkiness and heartfelt emotions. The cast of two brilliantly enacted the story of Cathy Hiatt and Jaimie Wallerstein. The play, even though not a happily ever after, is romantic--the telling of how two people came together for a short time. The story is entirely musical and is told from alternating points of views in a non linear form. 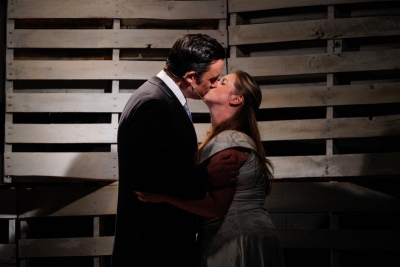 Cathy starts at the end of their story and Jamie at the beginning. The couple meet in the middle for a short span. But most of the show they are apart, which means each are carrying the storytelling basically alone. Tough to pull off, but they were seamless. You think of them together, but they actually spent little time on stage together.

The settings are Ohio and New York. Cathy never quite makes it as an actress and Jamie becomes a successful writer. They are rather young when they marry and the play goes through the stages of modern day couples, elements I’m sure a lot of the audience can identify with. It's hard to make it as a couple these days.

Husband and wife team Kerri Miller and Christopher T. Miller play Cathy and Jamie. A natural fit. Keri brought the emotion, and Christopher the humor. They definitely bring their acting to the table. 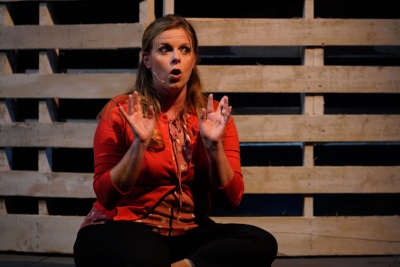 The couple have their own relationship with the play. Having met in the theatre and having split from prior flawed five year relationships, they have been together happily for fourteen years. It has been a dream for them to play this show. Now they are and they are doing it together.

A simple backdrop is composed of pallets, with all props on scene. A huge first for Lamplighters is a live orchestra set off stage. Beautiful music by William Ah Sing on piano and conductor P.J. Bovee on guitar, Adam Davis on violin and Keri and Christopher delivering the songs like a couple in love.

Laughter can be heard sprinkled throughout the show, and even though I’m more of a traditionalist when it comes to romance, I found myself laughing out loud a few times. Christopher's unexpected antics can't help but make you laugh.

It was great to be back at Lamplighters, in the cool theatre, enjoying theatre along with other people.

The play is 85 minutes with no intermission and masks must be worn. There is also some strong language. 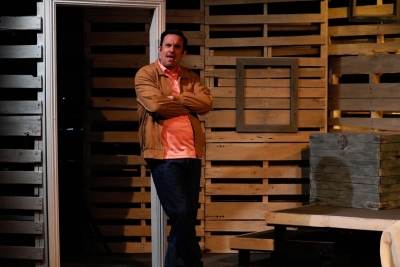 This is your chance to get out, cool off and support community theatre as they fight their way back. You have one more weekend to catch the show.

The next show for Lamplighters

"The Front Porch" A Drama