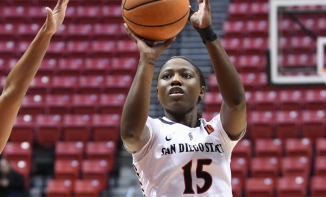 December 30, 2017 (Logan, Utah) - The San Diego State women’s basketball team nearly pulled off its second straight comeback victory on Saturday, but a 17-point first-half deficit proved too much to overcome in a 62-58 loss to Utah State in a Mountain West clash at Dee Glen Smith Spectrum.

With the setback, the Aztecs slip to 7-6 on the year and 1-1 in conference play, while the Aggies move to 3-10 overall and 1-1 in the MW after snapping a four-game losing streak.

SDSU was once again paced by senior McKynzie Fort, who led all players with 19 points on 8-of-12 shooting, while fellow classmate Lexy Thorderson broke a three-game drought on 3-point field goals, draining three triples before finishing with 11 points.

In addition to her scoring total, Fort also tied freshman Najé Murray for team-high honors with six rebounds, while sophomore Baylee Vanderdoes came up with four caroms of her own.

However, the Aztecs were unable to contain the Utah State duo of Victoria Price and Hailey Bassett, who combined for half of the Aggies’ offensive output while recording three steals apiece. Price logged her first career double-double after notching 18 points, including an 8-for-8 performance at the free-throw line, to go with 10 rebounds, while Bassett contributed 13 points on 6-of-9 attempts from the field.

Rachel Brewster also reached double figures with 10 points for the host school, highlighted by a 7-for-8 clip at the charity stripe, while Shannon Dufficy pulled down a game-high 13 rebounds.

Collectively, Utah State sank 18 of 20 free throws, including an 11-for-12 effort in the fourth quarter to offset a paltry .182 field-goal percentage (2-11) during that stretch.

Conversely, SDSU connected on 10 of 14 attempts on the charity stripe, but was just 6-for-28 for the afternoon on three-point field-goal attempts, including a 3-for-18 pace in the second half.

Still, the Aztecs nearly completed an improbable comeback after trailing throughout the afternoon.

The Aggies scored the first seven points of the game and gradually increased their advantage to 30-13 by the 6:35 mark of the second quarter following a layup by Jesse Geer.

SDSU fought back with a 14-6 spurt to trim the deficit to single digits, as Fort completed an old-fashioned three-point play with 13 seconds left before intermission, which narrowed the gap to 36-27.

Any momentum the Aztecs held seemed to dissipate in the third quarter after the visitors misfired on 12 of 14 shots from the floor during that span. When Price hit a layup with 39 seconds to go in the period, the Aggies found themselves in front by a 47-34 count.

SDSU battled back with nine straight points, cutting the margin to 47-43 after a jumper by Te’a Adams with 4:42 left in the fourth quarter.

A Thorderson triple with 3:59 left in regulation helped ease the sting of six USU free throws. However when Eliza West made a layup at the 3:00 mark, the Aggies owned a seemingly comfortable 55-46 advantage.

Thorderson connected from beyond the arc on the Aztecs’ next possession, while Naomi Ekwedike followed with a layup of her own moments later to pull the Scarlet and Black to within four at 55-51 with 2:29 to go.

Shortly thereafter, Price sank two foul shots to give the hosts a 57-51 edge with just under two minutes to play, but consecutive baskets by Fort and Geena Gomez tightened the score to 57-55 with just 42 seconds on the clock, setting the stage for a frantic finish.

After a West bucket, Fort came up huge once again, converting an and-one opportunity with 15 seconds left to cut the deficit to 59-58.

Brewster was fouled on the next possession, but made just one of two free-throw attempts. Incredibly, the Aztecs had a chance to vault in front, but Thorderson misfired on a three-point shot from the left wing with nine seconds remaining. Price then hit two free throws to provide for the final margin.

Despite committing one less miscue for the game (15-14), SDSU was outscored 15-8 on points off turnovers and trailed on points in the paint as well (28-26).

The Aztecs will be back in action on Wednesday, Jan. 3, when they play host to Colorado State at Steve Fisher Court. Game time is set for 6:30 p.m. PT.