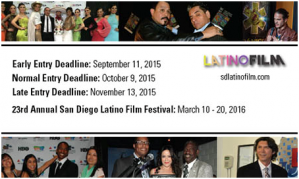 Originally launched as a student film festival, the San Diego Latino Film Festival has used the unique geographical and cultural location of the San Diego/Tijuana Border Region to make the festival a premier venue for the exhibition of international and U.S. Latino narrative/documentary features and shorts.

For full details and entry fees, which range from $15 to $60 depending on film length and deadlines, see http://sdlatinofilm.com/call-for-entries-2016-san-diego-latino-film-festival/