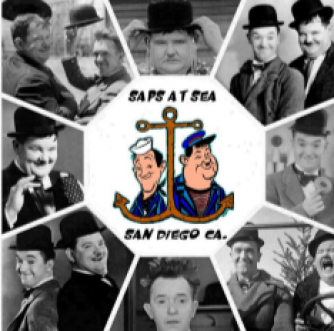 January 17, 2017 (Spring Valley) - What better way to kick off 2017 than with Laurel & Hardy?  The Saps at Sea, the local Laurel & Hardy fan club, begins its 39th year with a meeting on Saturday, January 28 at Williams Halls at Trinity Church in Spring Valley.

It's "Take That (Don't Get Mad, Get Even)" Night!  The Saps start with a riotous cartoon, SCREWBALL SQUIRREL (1944), directed by animation legend Tex Avery.

Then, Stan and Ollie cause mischief a plenty in YOU'RE DARN TOOTIN (1928). Directed by none other than Edgar Kennedy.  Russ Peck will provide a live music score!

The guest comedian is Charley Chase in SNAPPY SNEEZER (1929). This hilarious short has Charley meeting lovely Thelma Todd on a train trip. Later, he meets her cantankerous Dad. Charley doesn't know it, but he is responsible for many slapstick catastrophes befalling this poor guy.

After treats from the Keeleys at intermission, get ready for a double dose of Stan and Ollie!   In THEM THAR HILLS (1934), Ollie has gout, and Doctor Billy Gilbert recommends plenty of fresh air and relaxation. The mountains provide the fresh air, bootleggers provide the moonshine, Stan makes sure there’s NO relaxation and Charlie Hall & Mae Busch add to the fun.

And in the Academy Award nominated TIT FOR TAT (1935), the boys meet up with Charlie & Mae once again when they open an Electrical Store next door to Hall's Grocery. The only time in the history of the Laurel and Hardy series where there was a sequel to a previous short!