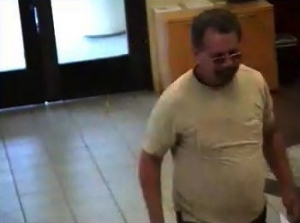 The latest of these robberies occurred at the Wells Fargo Bank located at 1235 Avocado Avenue on Saturday, July 20 at approximately 11:57 a.m.  The robber entered the bank and stopped at an island counter in the bank lobby.  The robber approached a teller and presented a note claiming he was armed with a bomb and demanded cash in specific denominations.  After receiving a sum of money, the robber left the bank.  No injuries were reported.

According to the F.B.I., the “Beer Gut Bandit” is believed to be responsible for bank robberies on July 5 at Wells Fargo Bank on Lake Murray Boulevard in La Mesa; on July 16 at US Bank on Fletcher Parkway in El Cajon; and on July 17 at Bank of America on Balboa Avenue in San Diego.