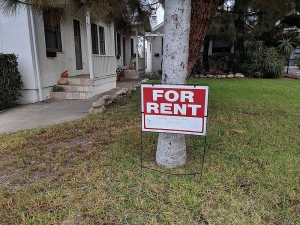 May 17, 2020 (San Diego) - As missed rent payments and delinquent mortgages pile up across the state, California Democratic lawmakers Tuesday introduced a series of sweeping proposals aimed at shielding homeowners, renters and landlords from the economic fallout of the COVID-19 pandemic.

A plan put forward by Sen. Toni Atkins, Democrat from San Diego and leader of the state Senate, would grant qualifying renters 10 years to repay missed payments directly to the state, which would in turn compensate landlords for the missed rent with tax credits that could be sold to pay mortgages and other bills.

A separate bill from Assemblywoman Monique Limon, Democrat from Santa Barbara, would allow California homeowners to request a forbearance on their mortgages for nearly a year while requiring mortgage servicers in most circumstances to tack on missed payments in monthly installments at the end of the loan. The legislation would also allow borrowers of auto loans, payday loans and other debts to postpone payments without fear of immediate repossession or other penalties.

“During emergencies and financial crises we need to beef up consumer protections, not dilute them,” said Limon, who chairs the Assembly Banking and Finance Committee.

Both proposals represent an unprecedented intervention from state government into California’s housing and consumer debt markets and are sure to draw intense scrutiny from a gamut of interest groups. Banks and mortgage servicers are concerned with how a protracted forbearance would affect their bottom lines, while landlord and tenant groups are united in their demands for state funds but have very different views of what strings should be attached to emergency rental help.

An “out-of-the-box” approach to helping renters and landlords

While California’s court system hit pause on most eviction proceedings during the governor’s declared state of emergency, the first of each month brings renewed questions for renter and landlord groups on what will eventually happen to them.

Comprehensive public data on precisely how many Californians are missing rent payments does not exist. While one national landlord group estimates that May rent payments were surprisingly on track with rates from last year, the longer the shutdown, the more missed rent payments start piling up. A UC Berkeley study found that rents owed by California households in essential industries total nearly $4 billion per month.

With the state hamstrung by a projected $54 billion deficit, Senate Democratic leaders think they’ve figured out a creative way to help both renters and landlords without further depleting state coffers.

Tenants and landlords would voluntarily enter a state program where the renters could repay past due rents directly to the state over a 10-year period, starting in 2024. No late fees or interest would be added on to the missed rent payments, and the state would forgive the debt of renters still experiencing major financial hardships.

Landlords would not be able to evict those tenants, but would instead receive tax credits from the state equal to the lost rents, starting in 2024. Those tax credits would be transferable, so landlords could conceivably sell them now to meet mortgage payments and other expenses.

“This is not a giveaway to anyone,” said Sen. Steve Bradford, Democrat from Inglewood, who helped develop the proposal. “This is not a free ride. The Senate is giving tenants and landlords a hand up, not a hand out.”

The program would cost the state an estimated $300 to $500 million per year, but would not be hard-capped should the need exceed those estimates. Renters would also have to provide documentation that they experienced financial hardship due to COVID-19, and higher-income renters could be excluded from the program.

Both tenant and landlord groups, desperate for public dollars, expressed cautious optimism about the proposal, but warned crucial details will need to be ironed out before they could lend full-throated support.

“I would say that I’m encouraged by the direction, but the details are going to matter,” said Brian Augusta, legislative advocate with the California Rural Legal Assistance Foundation.

Augusta stresses that any renter debt plan must be accompanied by a guarantee that landlords could not use non-payment of rent due to COVID-19 as an allowable pretext for eviction. Tenant groups would also prefer that participation in the program be mandatory for landlords, fearing some may decline the rental aid to evict tenants they previously viewed as problematic.

Landlord groups have concerns about whether selling tax credits would actually free up enough cash for them to meet their bills, especially if they can’t recoup the face value of the tax credits.

“It will certainly, as written now, provide relief to those owners who can wait till 2024,” said Debra Carlton, lobbyist for the California Apartment Association. “We’re certainly committed to working with (Sen. Atkins) on refining the program, our issue is going to be can we still help the mom and pop owners who might not be in business in 2024.”

The federal stimulus plan signed into law in March prohibited mortgage servicers — the companies that collect mortgage payments — from initiating foreclosures on homes financed with federally-backed mortgages. Borrowers could also request up to 180 days for forbearance — basically six months of not paying their monthly mortgage bill — with an option for 180 more days if the national state of emergency isn’t lifted by then.

But privately-owned mortgages not insured by the federal government are exempt from those rules. Those loans account for roughly 30% of mortgages nationally, and likely a larger share in California where high home prices often exceed what federal mortgage programs are allowed to finance.

Limon’s bill would extend the ban on foreclosures to private mortgages, and allow borrowers up to nearly a year in temporarily waived mortgage payments with the forbearance extending beyond California’s declared state of emergency.

Missed payments tacked on to end of loan; no lump sums

In other words, miss six months of your mortgage because you got laid off, you get six months at the end of your loan to make it up — no interest or penalties allowed.

“We know these lumps sum ideas are very, very difficult when someone is out of a job or their hours have been decreased,” said Limon.

Congressional Democrats on Tuesday released a third federal stimulus proposal today, with many of the same borrower relief provisions contained in Limon’s bill. But some consumer advocates say additional state action will likely be necessary.

“We can’t necessarily rely on what’s going to happen out of Washington,” said Lisa Sitkin, attorney with the National Low Income Housing Project. “We want the state to particularly help when it comes to low and moderate income borrowers.”

A spokesperson for the California Bankers Association, the premier banking lobby in the capital, said that the group had not yet taken a formal position on the bill and cited the voluntary arrangements banks are already striking with affected borrowers. Gov. Gavin Newsom negotiated a deal with several banks and credit unions in late March that would allow 90-day grace periods for certain borrowers.

But Diana Dykstra, chief executive of the California Credit Union League, said that granting mortgages an extended forbearance would be ruinous for smaller banks who depend on interest payments for their capital cushions.

“For the credit unions it will be a financial disaster,” said Dykstra. “If you’re looking at the way the bill is written, somebody can go a whole year without having to make a mortgage payment.”

Beyond the new protections for homeowners, Limon’s bill would provide more flexibility to other types of borrowers.

Repossession firms would be prohibited from repossessing cars for delinquent auto payments until 180 days after the state of emergency declaration was lifted. Auto loan borrowers could also request forbearances for up to nearly a year, and missed payments would be tacked on to the end of the loan term instead of delivered in a lump sum payment.

Landlords with mortgage debt would be granted similar forbearance options, as long as they deliver some form of yet-to-be-determined “rent relief” to tenants and agree to halt evictions. Vendors of payday loans — high-interest debt extended to typically lower-income consumers trying to bridge paychecks — would be required to reduce fees and provide extended repayment plans.

With the state Legislature working on an accelerated timeframe because of a pandemic-induced recess, both the Senate renter relief proposal and Limon’s bill will rapidly face a series of crucial votes in the coming weeks.