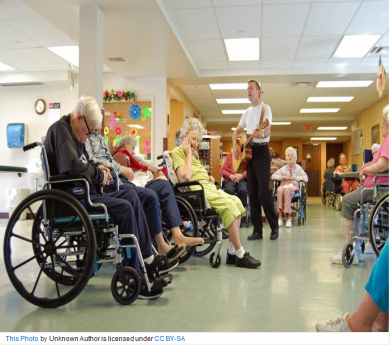 June 22, 2022 (Sacramento) - A group of advocates that has long fought to reform the state’s troubled nursing home licensing system is now attempting to kill legislation it sponsored, calling the amended bill “a step backwards.”

“Instead of the major reform that the nursing home licensing system needs, AB 1502 now codifies and endorses the current system, a system that has nourished the worst operators in the state,”  wrote Patricia McGinnis, executive director of the California Advocates for Nursing Home Reform.

Her strongly worded letter of opposition went to Dr. Richard Pan, chair of the Senate Health Committee, a few days ago. Nonetheless, the committee approved the bill this afternoon.
The bill’s authors, and other elder care advocates, say the bill as amended still represents important progress in the state’s efforts to better regulate who owns and operates nursing homes.
Democratic Assemblymembers Al Muratsuchi of Los Angeles and Jim Wood of Santa Rosa, the bill’s co-authors, said that they intend to move the bill forward, despite the new opposition from its sponsors.
Even in the 48 hours leading up to today’s hearing, Muratsuchi had continued tweaking key details in the hopes of finding a compromise that all sides could agree upon.
Reform advocates themselves are split. Dr. Michael Wasserman, a geriatrician and chair of public policy for the California Association of Long Term Care Medicine, said his organization supports the amended bill, which he views as “an incredibly positive step forward.”
Still, the about-face by California Advocates for Nursing Home Reform raises questions about the fate of a bill they had until recently championed as a way to overhaul the state’s nursing home licensing and ownership system.
Getting it this far has been a political battle, involving emotional hearings and strategic alliances.
Last year, a CalMatters investigation revealed an opaque state licensing process plagued by indecision, confusion and years-long delays. Stories spotlighted the Department of Public Health’s controversial treatment of California’s second-largest nursing home owner, Los Angeles businessman Shlomo Rechnitz, and his web of companies. The department allowed Rechnitz and his companies to unofficially operate 18 Country Villa facilities for years while their license applications remained in “pending” status; in five Windsor homes, the state has allowed Rechnitz and his companies to operate facilities despite the state’s having outright denied their licensing applications.
The Department of Public Health has a wide range of nursing home responsibilities. In addition to licensing, the department is responsible for routinely inspecting the state’s 1,200 nursing homes to ensure they are meeting federal standards. It also conducts complaint investigations and can cite facilities for violating federal or state rules, and levy fines. Department representatives on Tuesday declined to comment on pending legislation.
The original language of the bill would have established strict suitability standards, including 10-year history checks for new owners, a public process for vetting them, and annual reports to the Legislature by the Department of Public Health.
The amended language takes out some of these provisions, has shorter history checks, and institutes smaller discretionary financial penalties in lieu of more significant ones.
But Wasserman said he believes the amended bill will still serve to increase transparency and allow the state to more effectively hold owners and licensees accountable. He feared that the bill as originally written could have been tied up for years in litigation, and might have proven difficult to implement.
And Muratsuchi, who has collaborated closely with California Advocates for Nursing Home Reform, said he has worked in recent days to change certain language to address the organization’s concerns. He said some of the most important aspects of the original legislation remain intact. Specifically, it would close loopholes so that owners cannot buy nursing homes without first obtaining a license, and it would institute time limits so that the change of ownership process would not have yearslong delays, as has been the case with the Country Villa homes.
Muratsuchi said he’s trying to convince advocates that “even though it’s not exactly what we started with, that the essence and the substance of the original bill is, by and large, still in the amended version.”
The fight to fix the state’s broken nursing home licensing process has been gaining momentum in the past year. At a hearing last fall, Wood, who chairs the Assembly Health Committee, at times grew emotional as he questioned state officials.
“Where is the proactive, patient centered, public safety approach here?” he asked Cassie Dunham, an acting deputy director of the California Department of Public Health. “Where is that? Because I don’t feel it right now. And yet here we are. Here we sit. We have to wait for news articles. We have to wait for people to die.”
On Tuesday, his tenor toward the department had shifted.
“Making improvements in the licensing process for skilled nursing facilities is absolutely necessary,” he said in an emailed statement to CalMatters, noting that he is grateful for the department’s engagement and support.
“The legislative process, when it works well, takes feedback from all sides, and finds a way to move forward and, although it may not be the final position of any one stakeholder, it is progress and progress is the goal,” Wood’s statement said. He declined to be interviewed ahead of today’s hearing.
The industry has raised its own concerns about the licensing system.
In an email Monday, Corey Egel, spokesperson for the California Association of Health Facilities, an industry group, stated that the state’s change-of-ownership process “needs to be reformed to ensure the timely and expedited review of licensure applications so that licensure application requirements are reasonable with minimal disruptions to patient access to long term care services.”
He declined to say whether his organization backed the amended bill, but it has not registered official opposition.
The Assembly passed the original version of the bill in January.