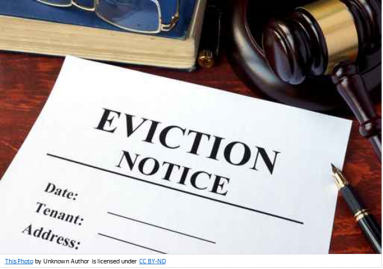 December 8, 2020 (Sacramento) - With California’s eviction moratorium set to expire in less than 60 days and 2 million people at risk of losing their rental homes, a group of tenant-friendly lawmakers want to forestall evictions for another year.

The proposal, introduced today by San Francisco Democratic Assemblyman David Chiu, would forbid landlords from evicting renters financially harmed by the pandemic through Dec. 31, 2021. Renters would have until then to come up with a quarter of the back rent they’ve accumulated since last September to avoid being kicked out in 2022.

Chiu’s bill marks the opening salvo in negotiations over one of the most pressing issues state lawmakers and Gov. Gavin Newsom will have to tackle in coming weeks. If nothing is done by Jan. 31, an estimated 240,000 California households with rental debt could be evicted just months away from a vaccine.
“The possibility that tens of thousands of folks could be forced from their homes would make COVID much more likely to spread and have devastating health consequences,” said Chiu. “We can’t allow that to be California’s fate.”
While landlord groups are open to extending an eviction moratorium for a more limited period of time, they argue they can’t afford nearly two years of missed payments. California landlords have been unable to evict tenants who have lost earnings or faced higher medical costs because of COVID-19 since April, when the state court system temporarily shut down eviction cases.
“We’re not going to see property owners survive all the way through 2021 if (Chiu) takes it all the way through December with no assurance that we’re going to get financial help,” said Debra Carlton, lobbyist for the California Apartment Association. She added that a proposal that revisits the necessity of a moratorium in a few months may be a nimbler approach.
Newsom was instrumental in brokering last summer’s compromise, which has largely stemmed a feared eviction tsunami thus far. This time, he and state lawmakers are looking to Washington, D.C., for help.
“Significant federal stimulus is absolutely necessary – and the governor will keep advocating to President-elect Biden and congressional leaders, making the case for renter and homeowner relief,” said Jesse Melgar, communications director for the governor.
California renters owe about $1.7 billion in back rent, according to an estimate by the Federal Reserve Bank of Philadelphia. That number is likely to grow significantly in the coming months if Congress allows extended unemployment benefits to expire at the end of the year.
Anya Lawler, a lobbyist for the California Rural Legal Assistance Foundation and advocate for other tenant groups, expressed hope that if a major federal rental assistance package is passed in the next few months, tenant and landlord groups could come to a compromise on when the moratorium should expire.
“I think that we are all hoping that that Dec. 31 date is not necessary and that we have the tools we need to work with quickly so that we can craft a long-term solution and the (moratorium) provisions can expire,” said Lawler.
While Chiu has introduced separate legislation that expresses an intent to provide financial assistance to renters and small landlords, the bill does not provide any specifics yet on how much money that would entail or how it would be distributed.
Carlton, the landlord lobbyist, said that a figure in the neighborhood of $850 million would be enormously helpful, and that landlords are willing to accept some losses.
Should the current moratorium expire at the end of January, renters who are able to pay 25% of the rent owed since September will be allowed to stay in their apartment. But landlords are still able to pursue the full rental debt accumulated since last April in small claims court—they just can’t evict tenants for not paying the other 75% of it.
Beyond how long a moratorium extension should last, landlord and tenant groups will grapple over whether any such extension should preempt local governments from providing more generous renter protections, such as a longer moratorium or more time to pay back landlords.
Chiu’s proposal also bars landlords from charging late fees on missed rent, a provision missing from last summer’s compromise that renter groups say some landlords have exploited.
Carlton said landlords don’t object to that provision.