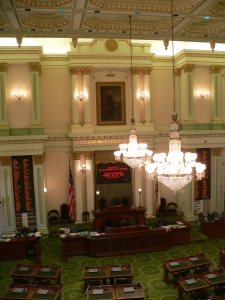 May 30, 2016 (Sacramento) – California law prohibits the use of video from state Assembly hearings for political campaigns or commercial purposes, although these same videos can be used by news outlets. A candidate who runs Assembly video footage in an ad can be criminally charged—even if the video is of himself speaking on the Assembly floor.

Now a lawsuit has been filed against the state claiming that this law violates First Amendment free speech, Courthouse News reports.

Donnelly wants to use video clips that include himself speaking in an Assembly hearing.

The Firearms Policity Coalition group wants to use Assembly footage in ads opposing a ballot initiative that would expand the definition of assault weapons and require background checks for ammunition purchases.

The law banning legislative videos from being used in political ads or commercial purposes applies only to the Assembly. Senate videos can legally be used for political purposes, Daily Wire reports.

Some incumbent legislators regularly send videos of themselves speaking during hearings in Sacramento to media and constituents or post the videos on their websites, choosing clips they believe will reflect them in a positive light.

Not allowing challengers to similarly disseminate videos of the Assembly members they are running against in political ads or e-mails to voters, for example, could put non-incumbents at a distinct disadvantage during elections.

Brandon Combs, chairman of the Firearms Policy Coalition Second Amendment Defense Committee, stated, "It is shocking that this law was ever passed in a state that claims to value diversity, tolerance, free speech, and open government,” Daily Wire reported. He concludes, “This blatantly unconstitutional statute should be opposed by people across the political spectrum."