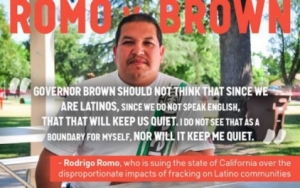 July 15, 2015 (San Diego’s East County)--Today, a Kern County family is suing Governor Jerry Brown, claiming that California’s new fracking regulations do not protect the health of Latino public school children. The lawsuit, filed by the Center on Race, Poverty and the Environment, argues the new fracking regulations illegally discriminate against Latino public school children, who are disproportionately affected by the negative impacts of fracking in their neighborhoods, including noxious fumes and illnesses that plaintiffs allege were caused by fracking exposure.

California’s Government Code section 11135 prohibits the state from intentional or unintentional discrimination on the basis of race. The suit, which names Governor Brown and California Oil and Gas Supervisor Steve Bohlen as defendants, claims that the state is discriminating against Latino students by permitting wells in close proximity to schools they attend.

Fracking in California overwhelmingly occurs close to schools that serve predominately Latino populations. More than sixty percent of the 61,612 California children who attend school within one mile of a stimulated well are Latino. Statewide, Latino students are over eighteen percent more likely to attend a school within a mile and a half of a stimulated well than non-Latino students.

Although they were intended to protect the public from the negative health impacts of fracking, the newly implemented regulations fail to address the inherent danger of allowing such practices to occur within close range of sensitive receptors, such as homes and schools. When fracking occurs close to schools, students are exposed to air toxins such as BTEX compounds, VOCs, and Hydrogen Sulfide that have serious impacts on their physical, social and emotional health.

“Everyday my daughters go to school, they fear for their health and safety because of how close the fracking wells are to their schools,” said Rodrigo Romo, the named plaintiff, whose two daughters have been exposed to dangerous levels of toxic pollution and psychological stress from extreme well stimulation while attending public schools in Shafter and Wasco, California.

Sequoia Elementary School, the school both of Romo’s daughters attended, is located within a half mile of three separate fracked wells, with one well less than 1,200 feet from the school. Students are often forced to stay inside for long periods of time because of the noxious fumes associated with fracking and many students suffer from serious, unexplainable illnesses that many families believe are caused by the wells.

“Fracking and other types of unconventional well stimulation threaten every child’s right to a quality education,” said Madeline Stano, attorney for the Center on Race, Poverty and the Environment. “Governor Brown and our state regulatory agencies have failed to protect public school students and our state as a whole by adopting regulations that do not address the existing racially disparate impact of well stimulations on Latino students.”

California’s Division of Oil Gas and Geothermal Resources (DOGGR) has a mandate to protect the life and health of Californians. Romo v. Brown aims to hold Governor Brown and state regulators accountable for protecting the health and safety of California’s students.

Founded in 1989, the Center on Race, Poverty & the Environment (CRPE) is an environmental justice organization that uses collective action and the law to support communities of color that bear the brunt of environmental hazards. With offices in California located in Delano and Oakland, CRPE represents communities and works directly with them to achieve their goals. For more on CRPE, go to www.crpe-ej.org.