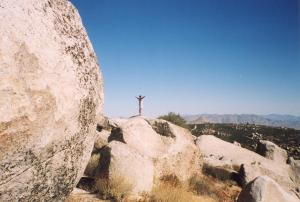 March 13, 2013 (Boulevard) – Iberdrola’s Tule Wind project has been slapped with a federal complaint seeking declaratory and injunctive relief. The lawsuit was filed by two nonprofits in San Diego’s Rural East County, the Protect Our Communities Foundation and Backcountry Against Dumps.

If built, Tule Wind’s phase I would include 67 turbines on federal land, each nearly 500 feet tall in rugged McCain Valley, a federal wildlife management and popular  recreation area. Additional turbines are planned on adjoining state, tribal and private property. Turbines would be close to campgrounds and homes in rural Boulevard, a predominantly low income community in East County where numerous other massive-scale energy projects have already been proposed. (See map showing cumulative impacts.)

“Eastern San Diego County is targeted as a rural sacrifice industrial energy and transmission zone without benefit of equal protection under the law,” said Donna Tisdale, also a plaintiff in the suit.

“These real world impacts have been documented at homes and ranches adjacent to existing turbine projects,” Tisdale said. “People are suffering now with some homes being abandoned while the industry, government agencies, and others shamelessly deny the reality of physics and well-known stress response health impacts triggered by chronic sleep disruption and environmental pollution. These projects are not clean or green!”

The project is one of numerous industrial-scale energy projects proposed in the Boulevard region. (See cumulative impact map of projects) proposed.

The suit contends that the federal government “Entirely failed to model the noise generation and impacts from wind turbines with an electrical generating capacity greater than 2 MW.”

The project is approved for turbines 50% more powerful, up to 3 MW.  The environmental assessments also failed to calculate, disclose or assess infrasound and low-frequency noise even though there is mounting evidence that both audible noise and infrasound produced by wind turbines is intense enough to cause disturbed sleep, ear problems, vertigo, headaches, dizziness, cardiac arrhythmias and other health problems.  Despite not assessing infrasound levels, however the BLM inexplicably concluded that infrasound from the project would not be harmful, though that conclusion “contradicts the applicable science,” the suit contends.

The lawsuit over Tule Wind also contends that environmental impact reporting failed to take the required “hard look” at impacts of electric and magnetic fields (EMF) event though dirty electricity has been linked to cancer, attention deficit disorder, and other serious health problems. Also ignored is the potential for ground current despite the fact that some nearby residents have already had ground current/stray voltage 1,000 times normal measured in their homes near the Kumeyaay wind turbines.

Boulevard area residents are already impacted by Infigen’s existing 25 Kumeyaay Wind turbines that were approved by the Bureau of Indian Affairs in 2005 with no EIR and a Finding of No Significant Impact. Turbine noise results in chronic sleep deprivation and stress related adverse health impacts.

New peer-reviewed noise and health studies are validating complaints from wind turbine neighbors around the globe. Some have abandoned homes and livestock operations that have been described as ‘acoustically toxic’ and ‘virtual microwave ovens’. The wind industry and their supporters, including government agencies, routinely dismiss these and other valid complaints and real world damages as NIMBY ‘myths’—but the tide is beginning to turn with the growing body of science-based evidence.

The suit also contends that federal laws were violated by failure to analyze alternatives such as distributed PV solar systems that are becoming more cost effective. and by allowing killing of protected birds including eagles without take permits.

FOIA response documents disclose the BLM originally planned to select the No Project Alternative based on impacts to Golden Eagles . “BLM apparently caved under intense political pressure from Iberdrola Renewables, a well-connected subsidiary of the Spanish utility,” a press release issued by plaintiffs contends, adding, “Iberdrola has received over $1.5 billion in US stimulus funds and is also a key player in the gutting of federal protections for Golden Eagles to allow ‘take’ permits for industrial wind projects. “

The lawsuit also argues that the project creates a “needless risk of wildfires” in a region with the highest-risk wildfire rating from Cal Fire.

Disturbingly, fires have been associated with Iberdrola turbines in some locations:

Retired Cal Fire Battalion Chief Mark Ostrander has stated that volunteer firefighters lack the ability to put out a fire started at the Tule Wind facility, since it would be too dangerous to fight fires beneath whirling blades hurling off burning debris, and since planes must make aerial drops of fire retardant chemicals at heights lower than the turbines.  Firefighters would have to wait until the fire burns out of the turbine project site, by which time it could become an “inferno” that could threaten vast areas as the 2003 and 2007 wildfires did, Ostrander has stated in local planning commission and planning group meetings.

In addition, plaintiffs argue that the federal government failed to demonstrate an actual need for the project.

Filed March 12 in U.S. District Court for Southern California, the suit seeks declaratory and injunctive released based on the following specific violations:

* Violation of the Bald and Golden Eagle Protection Act

Tule Wind currently has no Power Purchase Agreement and two outstanding permits from the Bureau of Indian Affairs and the State Lands Commission needed for additional turbines.

The Bureau of Land Management has granted a Right of Way for the Tule Wind Project and on March 8, amended it to allow overhead power lines that were previously approved as underground to connect the project with a substation,  the lawsuit indicates. The latter is a surprising move given tribal objections to underground lines in the area due to cultural resource disturbance.

The project is opposed by all top elected officials including Congressman Duncan Hunter, former Congressman Bob Filner, Supervisor Dianne Jacob, and Tisdale, who also chairs the Boulevard Planning Group.  It drew support from some labor and business groups.

"Green" is a tricky word used all too often by politicians.There is a disturbing trend to call unsafe, unhealthy practices "green" in order to promote them and get an unsuspecting public to approve them. Such is the case with wind farms in occupied areas and where there is senstive habitat. Center for Electrosmog Prevention, a La Mesa-based nonprofit, is against all wind and solar farms in close proximity to such areas. Being made ill and run out of your home and town is not what I call being responsive to the public needs, either. The people in Boulevard and our native Americans whose sacred ground is often impacted by these projects are to be considered valued citizens, not "collateral damage".

When it comes to energy, the wireless so-called "smart" grid and its wireless so-called "smart" utility meters are one such example. Our County and City elected officials have been so solicitous of SDG&E that they have not told the public the truth - that our public health is in dire jeopardy due to these radiation-emitting technologies. Many people are reporting illness starting with installation, and 57 California towns, cities, and counties (central coastal and northern CA) have banned or outlawed smart meter installations as a result of careful study. But here, in San Diego County, our County Supervisors and Mayors have avoided doing this, sticking their heads in the sand on this issue. They need to wake up and pass ordinances that decry and prevent the public health being harmed by smart meters and wireless infrastructure.

I hope and pray the truth comes out and justice is served against the Tule Wind project.