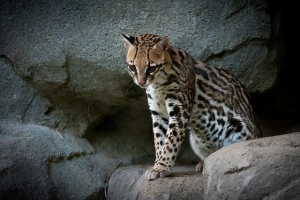 April 19, 2017 (San Diego) -- The Center for Biological Diversity and Congressman Raúl M. Grijalva, who serves as ranking member of the House Committee on Natural Resources, sued the Trump administration this week over the proposed border wall and other border security measures, calling on federal agencies to conduct an in-depth investigation of the proposal’s environmental impacts.

The suit, filed in the U.S. District Court for the District of Arizona, is the first targeting the Trump administration’s plan to vastly expand and militarize the U.S.-Mexico border, including construction of a “great wall.”

“Trump’s border wall will divide and destroy the incredible communities and wild landscapes along the border,” said Kierán Suckling, the Center’s executive director.

“Endangered species like jaguars and ocelots don’t observe international boundaries and should not be sacrificed for unnecessary border militarization. Their survival and recovery depends on being able to move long distances across the landscape and repopulate places on both sides of the border where they’ve lived for thousands of years.” 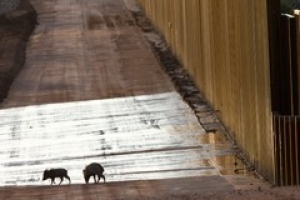 In San Diego’s East County, wildlife experts have raised concerns over the impact of the border fence on migration of Peninsular Desert Bighorn Sheep, which historically have roamed over the border seasonally for water sources.

The lawsuit seeks to require the U.S. Department of Homeland Security and U.S. Customs and Border Protection to prepare a supplemental “programmatic environmental impact statement” for the U.S.-Mexico border enforcement program.

The program includes Trump’s proposed wall as well as road construction, off-road vehicle patrols, installation of high-intensity lighting, construction of base camps and checkpoints, and other activities. These actions significantly impact the borderlands environment stretching from the Pacific Ocean to the Gulf of Mexico, which is home to millions of people, endangered species like jaguars and Mexican gray wolves, and protected federal lands like Big Bend National Park and Organ Pipe Cactus National Monument.

“American environmental laws are some of the oldest and strongest in the world, and they should apply to the borderlands just as they do everywhere else,” Grijalva said. “These laws exist to protect the health and well-being of our people, our wildlife, and the places they live. Trump’s wall — and his fanatical approach to our southern border — will do little more than perpetuate human suffering while irrevocably damaging our public lands and the wildlife that depend on them.”

Congressman Grijalva’s district is the largest Congressional district in Arizona and includes approximately 300 miles of the U.S./Mexico border.

If successful, the lawsuit would require the Trump administration to undertake a comprehensive review of the social, economic and environmental costs of the border wall.

The National Environmental Policy Act requires that federal agencies conduct environmental review of a major federal action or program that significantly affects the quality of the human environment.

The Immigration and Naturalization Service — the precursor to the Department of Homeland Security — last updated the “programmatic environmental impact statement” for the U.S.-Mexico border enforcement program in 2001. That review identified the potential impacts of border enforcement operations, including limited border wall construction, on wildlife and endangered species in particular as a significant issue.  The 2001 analysis was intended to be effective for five years but has never been updated.

During that same time, scientific understanding of the impacts of border walls and other border enforcement activities on wildlife and endangered species including jaguars, ocelots, Mexican gray wolves and cactus ferruginous pygmy owls has advanced significantly. The U.S. Fish and Wildlife Service has also designated “critical habitat” under the Endangered Species Act within 50 miles of the U.S.-Mexico border for more than 25 species since the outdated 2001 analysis was prepared.

Meanwhile, the number of undocumented migrants moving through the southwestern borderlands is at a historic low, and the border is more secure than it’s ever been.