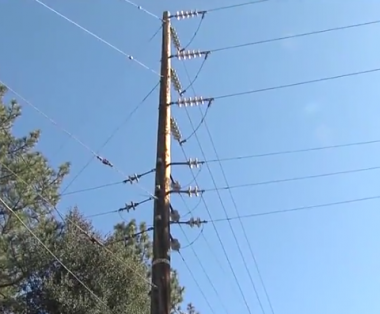 April 30, 2018 (San Diego’s East County) – Several property owners have filed lawsuits against SDG&E over negative impacts from the utility’s plan to widen easements to 15 feet on each side of power lines in communities including Pine Valley, Descanso and Alpine.

“The issue is the impact that it will have on a person’s ability to use their own property,” attorney Vince Bartolotta with Thorsnes, Bartolotta, McGuire, a law firm specializing in civil law and consumer advocacy cases.

SDG&E has indicated that it has notified approximately 100 property owners of the expanded easements for the purpose of fire-hardening power lines and equipment to prevent more devastating wildfires.

The company is offering compensation for the easements, but some property owners contend that the amounts are inadequate.

In some cases, Bartolotta says, “That homeowner is basically precluded from using that property.”  He adds that some easements include wells, ingress and egress to properties, and “some go right through the house.”

One such case was recently featured in a two-part series on KUSI’s Turko Files. (View part 1 and part 2.) Part 1, titled “Worthless,” documented issues faced by a Pine Valley couple who discovered the easement ran right through their house, including two thirds of their home as well as a patio addition and shed.  They raised concerns that they could not remodel, expand, or even rebuild after a fire.

In Part II, SDG&E spokesperson Allison Torres assured that the utility would write protection into easements giving all homeowners the right to rebuilt after a fire. But the homeowners indicated there are concerns over potential loss of insurance due to the easement, which they view as a land grab.  Turko asked why the utility couldn’t simply route around some homes, or put power lines underground.

The Pine Valley couple is among the clients now represented by Bartolotta.   “Our position is that in that case, they are impacting the entire house.”

The attorney says a class action wasn’t filed because each situation is different.  “In some cases, we may as well fight the take itself, saying this is unnecessary,” he says, adding that lines “could be moved or not be there at all.”

In other cases, property owners may be fine with having a portion of property taken but that SDG&E “is not valuing the property appropriately. They get a lowball appraisal and then offer less than that.”  SDG&E’s Torres has contested this point, claiming the utility is offering fair market value.

Bartolotta says that some homeowners want more money, while in others “we want them [SDG&E] to take the entire property because the easement makes the property unusable.”  Some property owners may be willing to move and have the utility buy the entire property at fair market value ‘for its highest and best use,” according to Bartolotta. For other clients who want to keep their homes and land, he says, “Then we have to prevent the taking of the easement where it is.”

Like Turko, Bartolotta contends that the utility could reroute around some properties or move the line and easement a few feet to avoid creating such negative impacts. “They are a big bureaucracy and power corrupts,” he observes. “They think that they are big and can just do whatever they want… Sometimes they ignore the ordinary citizen they are supposed to be serving, and that’s not right. That’s where I come in.”

Some homeowners might be able to negotiate with SDG&E directly, if the impact is slight.  But in most cases, Bartolotta cautions, “They’re going against SDG&E, who has done this tens of thousands of times through the years and has a stable of expert witnesses. The average homeowners don’t know a good appraiser from a bad one. They don’t have the money to go up against SDG&E. They need lawyers like us who have the experience to go up against SDG&E and get SDG&E to pay the highest and best use for that property.”

The firm has a track record of legal actions against SDG&E in the past on issues ranging from power poles to damage from wildfires linked to power lines, as well as a case in which a child was electrocuted by a power line and lost an arm.  “SDG&E knows us well,” Bartolotta says.

His aim is to get property owners compensated fairly or rectify some of the harm.  The process could move quickly or take a year or so for final resolution after a suit is filed, depending on whether the utility is willing to work an agreement out with the property owners, the attorney adds.

The law firm has indicated it is eager to speak with other property owners who have received notices from SDG&E regarding taking of property for the easements.  Vince Bartolotta can be reached at (619) 236-9363 or via the law firm's website at www.tbmlawyers.com..