Next president will appoint Supreme Court justice who will be swing vote;  at stake are women’s access to birth control and abortion, attorney tells local law students 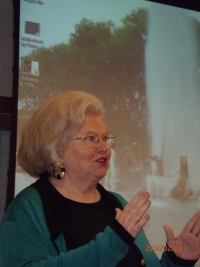 “We’re at a critical point,” Dr. Sarah Weddington, the lawyer who argued  Roe v. Wade before the U.S. Supreme Court, informed San Diego students at Thomas Jefferson School of Law last week. She warned that rights of women protected under the landmark decision are not secure.

Wedddington spoke on leadership as well as women’s rights--and how dramatically times have changed. Recalling the start of her career, she told the audience, “The world I grew up in, was very different.”

It was a world where women rarely attended law school; she was one out of five women in her class.

In school, girls played basketball, but only ran half the court, and could dribble only twice. Why? If they ran the full court, all that bouncing could hurt their innards—according to common belief.

She smiled and said she wanted to run for student body President, but was allowed only to run for Secretary. “No woman,” she recalled being told, “has ever been the President of Vice President” of the body. So Weddington ahd a female friend had their boyfriends run for those two offices and they still ran the student body, she explained, drawing laughter.

Weddington also recalled interviewing for her first job at a law firm. She went to school at the University of Texas in Austin. Male students were paid by law firms to go interview, but not females, who had to pay their own way. She raised the issue with Dean Page Keep, who changed the rule. As she put it, he “was a saint.”

While she was the first female to have her costs covered, that Dallas firm did not hire her. Why? Not because she’d be an incapable lawyer, but because the wives of the partners could not imagine a woman in the profession.

This is the world in which Roe V Wade was filed.

The plaintiff was a 21-year-old woman working a low-wage job, who became pregnant for the third time. She had previously given up a child for adoption and had another child cared for by her mother after escaping domestic violence. At the time, all abortions were against the law. She first sought an illegal abortion, but found the clinic shut down, before taking her case to court.

The day the case was argued before the Supreme Court was called “ladies day.” This is because three out of the four people arguing it were women. Weddington added that the Supreme Court did not really have women’s facilities in the Lawyer’s room. That was all the way in the basement.

Dr. Weddington moved on with her life after arguing the case and ran for office. On Jan 22, 1973 she learned of the decision when a New York Times reporter called her asking what was her reaction. She got a telegram from the Court five minutes later informing her that they were sending a copy of the decision by airmail. Indeed, that was a very different world since modern-day lawyers get their decisions in their computers or smart phones.

The decision came too late for “Jane Doe,” the pseudonym for the plaintiff, who had given birth by the time the ruling occurred.

The high court ruled that a constitutional right to privacy gives a woman a legal right to an abortion in the early stages of pregnancy. In later stages, the court found the state has a right to restrict abortions as long as exceptions are provided to protect a woman’s life or health.

Moving almost forty years into the future, Weddington said that today “reproductive rights are under challenge.” She added that America is at a critical point. The Supreme Court is just one vote away from overturning Roe v. Wade, so the next president will have the power to appoint a justice who could change history, or uphold challenges to the landmark case.  She turned to the young students in the audience. “We need the leadership of younger people.”

She also pointed out that when she brought this case forth, the medical community was very much pro-choice since doctors worked residencies in the OB-GYN ward, where they treated women with infections brought by botched abortions. Some women and teen girls died from complications of self-induced or illegally procured abortions.

The case itself was argued also on 14th Amendment grounds as well as Griswold vs Connecticut, which was a seminal case on privacy.

Next came a panel discussion with Vince Hall, Vice President of Public Affairs and Communications for Planned Parenthood and Professor Priscilla Smith, Senior Fellow at the Information Society Project at Yale University. They brought the discussion to the present.

Hall pointed out that those who oppose abortion under all circumstances are “a small but vocal opposition, whose voice is magnified beyond their presence.”

Following is a Gallup poll on the issue: http://www.gallup.com/poll/1576/abortion.aspx

Hall emphasized that there are efforts nationwide to limit access to reproductive services, not just abortion. Even some presidential candidates in the Republican primary have expressed opposition to birth control, which was legalized nearly a century ago.

He added that while abortion is a complicated issue, people at times have problems distinguishing their personal views from the role of government and privacy. Hall also said that younger generations “don’t have a reference point” as to how it was in the past.

He noted that using contraceptives actually lowers unwanted pregnancies, which in turn reduces abortions. Where borth birth control and abortion are widely available and legal, the World Health Organization has found that the abortion rate drops.  http://www.guttmacher.org/media/nr/2007/10/11/index.html

He also announced to the audience a bill introduced by Sen. Christine Kehoe, expanding the scope of practice for Nurse Practitioners in the State of California to allow for abortions in the First Trimester. http://www.utsandiego.com/news/2012/feb/24/kehoe-moves-to-expand-abortion-providers/?print&page=all)

Professor Smith addressed the attendees next. She went in detail on how “we’re always at a critical point in our movement.”

She said that there are three phases she can identify from the pro-life movement. The first was a negative backlash to Roe. They were not secretive about it and published their plans in Strategies for Reversing Roe v Wade.

According to Smith, they have engaged in two seemingly opposing tracts. The first are the absolutists who want to ban all abortions at all costs. The second group are the incrementalists.

Smith said that personhood bills are about overturning Roe V Wade. Personhood bills introduced in various state legislatures and Congress declare that life begins at conception and give any fertilized eggs “personhood.”  These are examples of absolutist actions, Smith said.

Laws that require providers to meet non-medically necessary conditions are examples of incrementalism. Incrementalists have tried to make a case that it is in the interest of the state to regulate potential life.

Currently there are several other measures, such as “compelled speech cases” where women are required to listen to legislature-mandated information before obtaining an abortion, that are on their way to the Supreme Court.

Smith concluded that there is also a war of information.  She emphasized that the Supreme Court is in play and that if President Obama’s Republican opponents have all said they would seek to appoint justices who would overturn Roe v. Wade, and taking women back to an era of illicit back-alley abortions or alternatively, carrying unwanted pregnancies to term, even when a mother’s health or life is at risk.