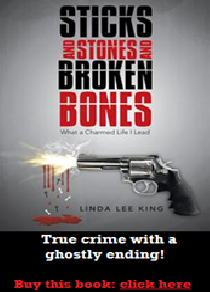 October 17, 2014 (San Diego)--Linda Lee King, a recovering Catholic, news reporter, and publisher of a weekly newspaper, the Free Press News, who has struggled with Post Traumatic Stress Disorder (PTSD) since childhood, encapsulates that and all her experiences in a riveting book, Sticks and Stones and Broken Bones: What a Charmed Life I Lead. Growing up in 1950s America where children did not speak until spoken to and when the Catholic Church concealed many occurrences of inappropriate behavior, one moment in her young life caused trauma that would haunt her into adulthood. That sets the tone for this well-written book. 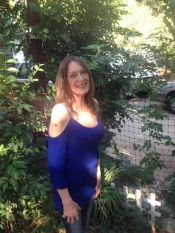 King has been divorced, widowed, and haunted by paranormal forces she cannot explain. She sees the world as not black and white but bleeding red with violence. That violence breeds brokenness, but she feels it is never too late to seek help. She especially worries about the future children of America and how violence will affect their lives, and it comes across in her book.

It is clear from reading her book that King feels that the battle is not hopeless. She believes that with early detection and counseling any past trauma can be treated. She chronicles in Sticks and Stones and Broken Bones how much she has been through in her life as a single parent and a recovering Roman Catholic. Now, she reaches out to others through this book who share her pain to tell a personal story of forgiveness, hope – and – in the end – healing. This book is therapeutic for her, as well it can be for those who read it.

King has led an interesting life, which she details in this book. She describes her first marriage to a Thomas Gordon Rousku, almost immediately after coming back from her sojourn in Hollywood and the hippie culture of San Francisco, while attempting to “find herself.” She married Rousku on December 13, 1968. It just so happened to have been Friday the 13th, which should have been an omen for her, especially considering the circumstances of the marriage. It seems that her husband was homosexual and thought by getting married somehow that would get the “gay” out of him, as King describes it in her book. Her marriage to Rousku was actually doomed from the start. She puts this particular episode in her life in perspective by stating: “Our relationship was going downhill fast. One night, when we had a houseful of dinner guests, he picked a fight over dinner. At some point in the argument, Rousku tossed his plate of food on the floor. This was familiar, something my mother would do. I took the coffee pot and dumped the grinds on top of the mess. ‘You clean it up!’” Mind you, King was still trying to “find her way”, basically a late teenager. The author concludes by stating: “By Spring of 1970, it was over. Rousku filed for divorce, claiming mental abuse. The fact is, gay people can’t force themselves to be straight. And I can’t fix gay. Tossed out, I had nowhere to go. I walked out the door, suitcase in hand, heading God knows where. I couldn’t go home. Wild child on the run again.”

After her first failed marriage, the author describes a poignant time in her life, stating: “For the next year and a half, I bounced around from one job to the next, never settling too long in one spot. Getting high on LSD, doing coke, and black beauties (pharmaceutical speed). Self-medicating was normal. I felt normal when high.” From reading this, it is not hard to envision the other things happening in her life that she writes about, such as the paranormal dreams. I actually had a similar experience myself in my early life, trying to “find myself.”

Perhaps the most profound revelation to me in this book, and something that resonates with me on a personal level, is a passage in which King states: “Regardless of my efforts to shelter my young children from my personal trauma, there were repercussions. Today, they are broken adults I can’t fix. The impact my life events had on me was trans-generational – I passed it on to my children. Realizing this in 2009, I began examining my own generational, social, and religious conditioning, and the significance it had in developing my odd behavior, and the way I dealt with issues.” I know exactly what she means, and I can relate to it. This personal trauma that she speaks of results from seeing a subsequent husband being shot and killed by a policeman before her very eyes, and another husband being found dead in the trunk of a car not long thereafter. That can be devastating on anyone’s psyche. She indicates in her well-written and incisive book that the most traumatic moment in her life was a day in 1974, when her husband was shot and killed. It says a lot about King that in a contentious and protracted civil suit after the death of her husband – that she would turn down a large financial settlement in her pursuit of the truth and justice, which she would eventually get in a jury verdict.

King actually dedicates a chapter in her book to trauma survivors, from her personal experience, by stating; “Violence breeds broken people: war, racism, rape, and murder traumatize the soul. Society’s next generation of children are growing up damaged. Violent experiences impact the way we live. For people of all ages, especially with children, early detection and counseling can prevent mental health problems from compounding into a life of torment, poverty, and addiction. Based on my peculiar history, I’m one of fifty million reasons why early mental health intervention services are necessary for children and their parents in the event of unexpected tragedy.”

The author speaks candidly of her granddaughter in Sticks and Stones, stating: “Forced out of my home, moving into my youngest son’s house wasn’t easy, and it took months to find a place in California. I needed a good school district for my granddaughter. Three adults with issues, and an angry, emotionally disabled teenager: It wasn’t pretty. A few violent, knock-down, dragging-her-out – the-door incidents, it was obvious the girl needed professional help, too. It was not right for her to be forced to sever family ties and moving two thousand miles away to live with me because no one could handle her. No wonder she had abandonment issues. Like a hot potato, tossed to the next of kin. I love and care for her but I’m not her mother. The girl made that loud and clear. We argued and fought nearly every day until she graduated. The key component in all this? Emotional neglect and abandonment affecting her mental health.” All of this sounds strangely familiar to me, from a personal and familial standpoint. It is almost like King is preaching to the choir!  The author did indicate to me that she is still struggling with her granddaughter, stating that her granddaughter was jailed recently for a transgression. It brings to mind something that my mother once told me, her grandfather stating to her; “kids will break your heart!”

There are many subplots to Sticks and Stones that helps to define King, but foremost, it is clear from reading this book that the author has triumphed over tragedy and it is a story that we all can learn from. This is definitely a page turner and a good read.