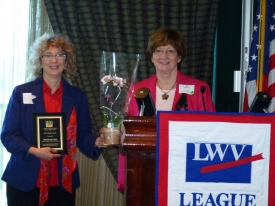 May 20, 2012 (San Diego) -- The League of Women Voters, San Diego this week presented East County Magazine with its Media Award 2012.  The honor was bestowed in recognition of ECM's coverage of developer's efforts to abolish community planning efforts.

ECM's articles and an editorial on the county's "Red Tape Reduction Task Force," a developer-stacked panel, alerted many in the community who were unaware that their ability to be informed and provide input on proposed developments could soon be suppressed.

Area residents turned out to voice overwhelming opposition at a Board of Supervisors meeting, where Supervisors voted to save the planning groups.

The recognition is the 45th journalism award that ECM has received since its inception in September 2008.

Congratulations, Miriam!  The hardest working woman in the news business!  Quality, in-depth reporting is the hallmark of East County Magazine.

High praise from a hard-working candidate who is well-versed on the issues!