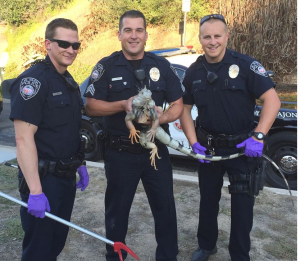 August 25, 2015 (El Cajon) – El Cajon Police officers have collared an unusual “suspect” spotting rambling through backyards along Helix View Drive. Though a caller reporting a “possible alligator,” the roving reptile turned out to be a large iguana native to the tropics but commonly kept as pets.

Fox 5 News reports that the five-foot-long iguana put up a struggle, whipping officers with its tail before being taken into custody.  Police were able to locate the owner and return the missing pet.

However East County Magazine has learned this may not be the only giant iguana on the loose locally.  One of our writers informed us last week that her houseguest in La Mesa’s Lemon Avenue neighborhood reported seeing a large green reptile, 2 or 3 feet long, that he believed to be a green iguana, lounging around near fruit trees in her backyard.  So be on the lookout!