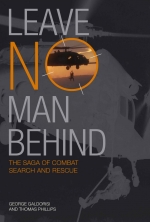 August 15, 2009 (San Diego)--This is a remarkable and opportune book. San Diego-based authors George Galdorisi and Thomas Phillips – both with significant operational experience in multiple theaters – are not poets. But they have given their narrative an epic quality.

To distill the past 100 years of combat search and rescue (CSAR) experience between two covers is an achievement; to publish it just as the battle for future national security resources is joined may well be a public service.

The operations that shaped CSAR – the heroism and the heartbreak – yield three consistent elements: the sheer courage of the aviators, the ever-present and ever-fickle hand of chance, and military intelligence – specifically, detailed knowledge of threats and threat systems.

Readers interested in the razor-thin difference “actionable intelligence” can make will want this volume on their bookshelves.

A page turner, the book does not neglect either the operational context or the key technical pieces of what is by definition a high-risk drama, with extraordinary demands on human endurance and spirit. The authors open their story with a quote from Michener’s Korean War novel, The Bridges of Toko-Ri. “Where do we get such men?” they ask. As the individual accounts unfold, readers will be asking themselves, where indeed?

The volume is organized as history – beginning with WWI and running right up to the early years of Operation IRAQI FREEDOM. The narrative is divided into five parts: the birth of CSAR; CSAR’s evolution in WWII; post-WWII and war in Korea; the war in Southeast Asia (the heart of the book); and adrift in small, but savage wars of peace. In the best war stories, the “lesson” is unspoken, but unmistakable. This ample volume is rich in such lessons.

Readers will also benefit from an extensive body of notes, a useful index—breaking out units, people and subjects—and a limited, but worthwhile selection of pictures. The comprehensive interview record illustrates how the research and writing occupied the authors for the better part of four years, while the carefully compiled references point to numerous opportunities for further investigation.

The final chapter, Quo Vadis, assesses the future prospects for a hard-won, but still vulnerable, CSAR capability. With the resources vs. requirements arguments hovering over the run-up to the next Quadrennial Defense Review, the chapter could – and perhaps should – stand alone. It would make a valuable contribution to the noise and dust kicked up by contending editorials.

Today, after long years swinging between ardent support and benign neglect, U.S. forces are again positioned to field an exceptional CSAR capability. But the hiatus in major combat operations has reduced the mission tempo – raising the question of resources. Can the U.S. afford a finely honed capability it rarely needs?

With an authority that only comes with field experience, the authors provide an unequivocal answer by bringing the CSAR story to a close with a haunting question of their own. Given the barbarity of current irregular conflicts, they ask, “Dare we leave even one behind?”

Walter Hall is the pen name of a La Mesa-based defense analyst with years of experience navigating the byzantine politics of national security in Washington. An earlier version of this review first appeared in the American Intelligence Journal (Winter 2008-2009).