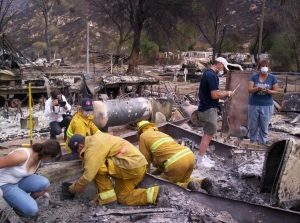 The motion claims SDG&E did not provide proper notice to the California Public Utilities Commission (CPUC) about a proposed “wildfire expense balancing account” – a rate hike that would force the public including fire victims to pay SDG&E’s uninsured liability costs for massive wildfires that it caused.

As a consequence of those fires, “the public—notably the ratepayers in San Diego, including the victims of the 2007 fires who have already been burned once—have been deprived of the opportunity to be heard,” reads a motion calling for public hearings in San Diego County.

“SDG&E did not seek recovery for the 2007 fires until it submitted its Rebuttal Testimony in December 2011 which it withheld from the public,” a motion for party status filed by the fire victims reads.  Plaintiff’s counsel learned of the request only when contacted by a news reporter, according to the motion.

Diane Conklin, spokesperson for the Mussey Grade Alliance and a party in the proceeding, stated that, “We are gravely concerned that San Diego Gas & Electric’s ratepayers could be required to pay up to some $463.9 million presently books as a regulatory asset by SDG&E for uninsured wildfire costs incurred by the company in the 2007 wildfires in San Diego County, ignited by their equipment, without being offered a public hearing on the application.”

Conklin accused the CUC of "stalling" on setting a public hearing locally.  She noted that during other CPUC hearings in which the Alliance has been involved, there have been public participation hearings, including Sunrise Powerlink and others. 'This is no different," she said.

Other parties include The Utility Reform Network (TURN) .  “SDG&E wants all the costs of the 2007 to be paid for by customers,” Mindy Spatt, TURN spokesperson, stated according to KPBS.  “They want to know in advance that even if they are negligent, even if there’s criminality involved, customers are going to pick up the tab.”

Supervisor Dianne Jacob, who represents most of the burned-out areas, has also sent a letter urging the CPUC to hold hearings in San Diego.

If the CPUC were to approve SDG&E’s proposal, Jacob said, “public utilities would have a disincentive to properly maintain their infrastructure and the burden to ensure safe equipment would be thrust unfairly onto ratepayers.”

Senator Chris Kehoe has also asked the CPUC president to hold a hearing in San Diego.

"The cost for local residents to travel to San Francisco to participate in a hearing would be prohibitive for many who are interested in testifying," she wrote. "The CPUC demonstrated leadership first in calling for an investigation into whether any of the 2007 fires could be linked to the utility, and then the Commission’s work to protect Californians from future fires by instituting new regulations, is commendable. As a result of the investigation by the Commission’s Consumer Protection and Safety Division, we know that the Guejito, Witch, and Rice fires were linked to power lines."

She added, "The public is asking once again that the Commission hold at least one hearing in the San Diego region on this important matter.

Two other utility companies, Pacific Gas & Electric and Southern California Edison, have withdrawn from the application for the wildfire expense account balancing proposal.

SDG&E, in paperwork filed with the CPUC, has maintained that failure to adopt the proposed charges  “would leave the utilities exposed to massive wildfire costs with no established provisions for recovery.”  Such uncertainty “threatens the financial health of the utilities, both now and in the future,” SDG&E claims.

Skeptics, however, have questioned why Sempra,  SDG&E’s parent company which posted record profits last year, has not asked its stockholders to absorb the costs of the utility’s negligence—instead of asking the very people victimized by its actions to cover these costs.

Terrie Prosper, media spokesperson for the CPUC, told ECM that “a decision on the request to hold hearings in San Diego County has not yet been made.”

Its is common knowledge that SDG&E and the CPUC are in bed together. In the end all we will have is the power of the people to fight the evil SDG&E. The courts have turned their backs on us. SDG&E is a true enemy of the people. They are destroying our beautiful back country with useless transmission lines, bird killing wind turbines and plans of massive solar panels, while trying their very best to discourage the only sensible diection for energy to take.....roof top solar. Hopefully in time each home can be totally energy self-sufficient. Well this is SDG&E's worse nightmare. They would own the sun if they could. Getting back to these propsed rate increases....first of all SDG&E DOES NOT NEED MORE MONEY! And yes they are responsible for many of S.D. devastating fires. But this is really not about that, its about SDG&E finding new ways to gouge us. I know of people now who can no longer afford to use their air-conditioners or heaters because of these high utility rates. It is time for someone to step in and regulate these monsters, and it certainly won't be the CPUC. Unfortunately SDG&E bribes their way into everybody's pockets and the only ones who can stop them are those that are their victims, because EVERYONE else has been paid off by them. People unite! SDG&E is your worst enemy!

Wildfires require an ignition. It can be from a power line blown down by the wind, a helicopter contacting a power line, lost hiker's signal fire, a illegal immigrant camp fire, a group of teenagers with a bonfire, or a building fire that spreads to the wildlands. These are the actual causes of the fires of 2002, 2003, and 2007. ALL ignitions cannot be prevented.

Major wildfires need large expanses of older vegetation to spread. We had allowed our wildlands to become unnaturally old and overgrown (at least before the fires).

Building owners need to maintain their houses and the area around them in a manner to limit the changes of catching fire.

Who pays for all the damage caused fires started by someone other than SDGE?
Do the Forest Service, BLM, State Parks, and CDF have some liability for maintaining wildlands in a hazardous condition?
Is it actually possible to build and maintain a network of overhead power lines and guarantee that they will never fail in wind?
Who is liable for the helicopter striking a power line? (The government has never paid claims for Pines Fire, 2002)
Who is liable for a branch breaking off of tree that is in compliance the government's fire laws and blowing across power lines?
Is the Border Patrol liable for fires started by illegal aliens?
Should the home owner with no brush clearance be compensated the same as the one in compliance with the laws?

SDGE is not blameless but they should not bear the entire burden just because they have deep pockets and appear to be universally despised.

In the long run, it's either the rate payers or the tax payers that pay. And we are them.