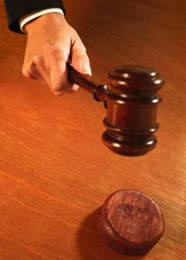 Meanwhile a Superior Court judge has set a December 18 hearing in hopes of hammering out a settlement between the Grossmont District and those suing to enjoy Grossmont against spending money that plaintiffs believe should be used to build the school.

“Alpine Tavern presented us with a $504 check,” George Barnett wrote in an e-mail posted at the Ranter’s Roost online forum. “The event was to raise funds for the legal costs of challenging Grossmont in our fight for an Alpine high school.”   The community turned out in force for the event, he adds. “The Alpine Tavern’s proprietor said that last Tuesday evening saw their biggest Tuesday day ever.”

In Superior Court on Friday, Judge Joel Pressman heard arguments in the case. The Alpine Union School District and Alpine Taxpayers for Bond Accountability have asked the court to grant an injunction to halt the spending of bond money on unauthorized projects.

Plaintiffs contend that Grossmont has misused money from Propositions H and U, which authorized money for an Alpine high school.  The board has spent money on some projects not in the bonds while failing to build the long-promised school.  The plaintiffs seek $70 million as well as the 93-acres of land acquired for purposes of building the high school, before the district backed out of its construction plans.

Grossmont’s board majority has also defied a Grand Jury report and refused to put money into escrow to allow the Alpine Union High School District to build a high school if parent’s efforts to unify that district and leave Grossmont are successful. The County Board of Education has sided with parents, asking the State Board of Education to support the unification efforts and wresting funds away from Grossmont to fund building the high school in Alpine.

An attorney for Grossmont said the claim is “without merit.”

Judge Pressman has asked both sides to meet in his courtroom on December 18th at 2 p.m. in an effort to work out a deal before he will consider the injunction request, UT San Diego reports.  The hearing will take place in Room C-66 on the fourth floor at San Diego’s Hall of Justice.