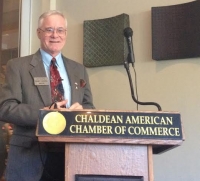 August 17, 2015 (La Mesa)- The San Diego East County Chaldean American Chamber of Commerce hosted its second Meet Your Candidates event at Sammy’s Woodfire Pizza in La Mesa on August 5. The speakers were Assemblyman Brian Jones, who is running for Senator Joel Anderson’s seat, and 71st state Assembly district candidate Randy Voepel, who has been Mayor  and served on Santee’s city council since 2000. Voepel is running against Mike Harrison, who currently serves on Duncan D. Hunter, and Tony Teora, an engineer. (Harrison spoke at a prior Chamber event and Teora is invited for the future.)

Ben Kalasho, President of the Chamber, introduced Voepel as the first speaker. “Randy’s a great guy. He’s an honest, down to earth kind of guy… He’s easily reachable.”

Voepel praised Jones, then stated, “We go to war for you, trying to represent what you stand for. With Brian and myself, you’ve got pro business, pro government… One thing I’ve got working for me is I’ve been doing the items I’ve listed for 20 years and they work… Santee city has a balanced budget. I’m also endorsed by most of the elected officials in the county.”

Kalasho asked Voepel what he plans to do in Sacramento. Voepel replied, “The first year, I will keep my mouth shut and I’m going to observe. Brian has told me ‘Your best bet is to observe.’ After a year, then with Brian’s help and other people’s help, we’ll get moving.” He cited water as an issue he is passionate about, adding, “I have a game plan to work politics over the next six years.”

Kalasho then introduced Jones, adding that he’s known the Assemblyman for a long time. Jones attended the first Chamber gala, and Kalasho has been to a couple of Brian’s roundtable discussions.

Jones credit much of his success to Voepel, citing his success at building a business and retiring/selling it as well as with local government experience and recruiting others. He then went on to explain about himself. “The first two years in the State Assembly, I hated it.” He was used to working with colleagues, like he did in city council. “People disagree with you… The constituents have real issues. I’ve also learned how to get legislation passed.”

Jones discussed his bill to allow non-motorized vehicles in parks. “We’re going to work on water issues next year… We might take a small bite out of a big elephant, CEQA (California Environmental Quality Act.”  He added, “I will leave business for Randy to finish.” Jones leaves office due to term limits at the end of 2016 but aims to run for Senator Anderson’s seat—though just when remains unclear. If Anderson defeats Supervisor Jacob next year, it would trigger a special election to fill the State Senate seat. If Anderson loses, he would be termed out of his State Senate seat in 2018.

Kalasho commented on how the Chamber had a drought mixer and there were a lot of attendees there. He then asked if Senator Anderson has filed or declared officially if he’s running against Supervisor Jacob. An aide to Voepel and Jones said that Anderson has turned in an intention statement, but there is no press release yet of an official declaration.

Kalasho then asked what Jones’ number one thing would be that he would focus on in the Senate. Jones told him that he likes the constituents’ aspects of the job. He mentioned two things he’ll focus on. “I’ll be carrying on with pro small business legislation [and] going to work with Prop 64.”

John Minto, VP of Santee city council, mentioned how he heard about a bill that would separate organic waste from trash. Jones commented, “I’m not sure where that bill is at.”

Someone else brought up a bill on cellphone towers. Jones wasn’t sure about that bill. It was hard for him to remember the wording of that bill. “2300 bills were introduced this year. The governor, this year, will look at 1100 bills.”

Michael Emerson with the Grossmont Healthcare District asked if there’s any Medi-Cal, Medicare, or medicine bill. Jones said there will be a special session this year. “The Governor is looking at sustained funding.” Emerson mentioned he’s been passionate about the Medi-cal reimbursement bill and he wants to see it move forward.

Humbert Cabrera from Cabrera and Associates Inc. and the El Cajon Rotary Club asked Jones about Prop 13. Jones replied, “There’s a push for a split role, split commercial and residential property, and take residential property out of it.” Apartments, rental condos, rental houses and vacation rentals would become commercial under that plan.

For information about Voepel, visit: http://www.randyvoepel.org/.

To learn more about Jones, go to: http://www.electbrianjones.com/.

For information on Tony Teora, the third candidate in the 71st Assembly district race, visit http://tonyteora.org/  and  http://www.eastcountymagazine.org/teora-announces-assembly-run-seeks-%E2%80%9Crestore-local-control-bill%E2%80%9D-help-rural-residents-also-backs .