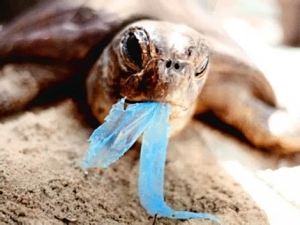 August 30, 2014 (Sacramento) – Plastic accounts for 90% of all floating debris in the ocean. This has negatively impacted over 250 species and puts petroleum-based chemicals into our food chain. Many bags wind up in the “Great Pacific Garbage Patch” in the north Pacific Ocean that has been estimated to measure hundreds of thousands, even millions of square miles.  Whales, dolphins and sea turtles choke by swallowing plastic bags, which resemble jellyfish prey. Bags can also become entangled around an animal’s neck.

To help solve this problem, the California Legislature has voted 22 to 15 to ban plastic grocery bags, joining more than 100 cities nationwide that have already banned the bags.  The California measure, Senate Bill 270,  is now awaiting Governor Jerry Brown’s signature.

East County’s Assembly representatives split on the measure, with Republican Brian Jones voting against it and Democrat Shirley Weber voting in favor.

The final bill is a compromise measure  that addresses concerns over the impact on workers, said Senate Pro Tem-elect President Kevin De Leon of Los Angeles. Senator De Leon originally opposed the bill, but worked with industry and environmentalist to craft a solution. He calls the revised measure “a win-win for the environment and for California workers.”

This legislation will implement a ban on single-use plastic grocery bags while promoting recycling and California manufacturing.  It also provides financial incentives to retrain California workers in affected industries.

Senate Bill 270 will institute a plastic bag ban beginning in 2015 for grocery store carry-out bags. Stores will be required to recycled paper, reusable plastic and compostable bags for 10 cents apiece, or consumers can bring their own recycle bags for shopping.

The measure applies to grocery retailers over 10,000 square feet with at least $2 million in annual sales and an in-store pharmacy, as well as convenience food stores and food marts.  There are some exemptions, such as for bags used to hold prescriptions or to separate items in order to prevent contamination.

The bill had support of a broad coalition including dozens of organizations, notably the California Retailers Association, Silicon Leadership Group, California Coastal Commission, Sierra Club California, and many cities and counties, including Los Angeles and San Francisco.

It was opposed by a  much smaller group including the Howard Jarvis Taxpayers Association, International Paper, the American Forest and Paper Association, and the City of Laguna Nigel. Laguna Nigel’s argument against the measure states, “This bill eliminates the ability of a local government to exercise its own discretion based on the unique needs and business climate of each City.”  Laguna Nigel also argued that the measure allows grocers to profit by selling bags at 10 cents apiece to consumers.

View a press conference from the bill introduction: https://www.youtube.com/watch?feature=player_embedded&v=80dDEg-VndI