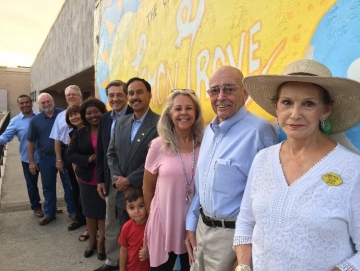 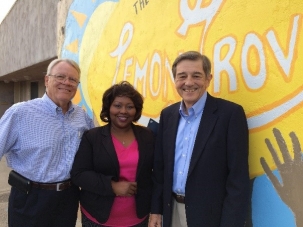 Bailey got the Council chamber audience laughing several times, including when he said, “I had the great joy of sitting next to Jack so I think it’s great that we can be here together. One of my favorite notes I passed to Jack was `What the hell are they talking about?’  and Jack would always pass the same note back and say` I don’t know either but vote no.’”

Doherty touched on Lemon Grove’s semi-rural atmosphere multiple times throughout his speech, saying, “I really loved Lemon Grove. It was close to my work in San Diego and I loved its semi-rural atmosphere. You could still hear the cows and there was a donkey you could hear quite a bit, and if the wind was right you could smell the dairy. We had an open field across from our house; it was not unusual to see a horse being ridden up the hill.”

Festivities for the 40th birthday included cupcakes and a video.  The series will include #LGHistoryHunt #locallemonrush and #throwbackthursday over the course of the next year.

During public comment, several citizens spoke on their efforts to make Lemon Grove a better place. A. Watson called on the City to establish an Arts and Culture Commission. 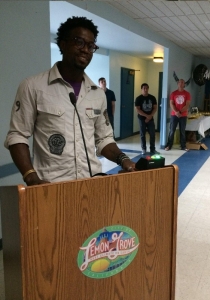 Photo: A Watson, Proponent of an Arts & Culture Commission

Watson commented that Carlsbad developed its Arts & Culture Commission in 2011 and said that Lemon Grove should do the same. “Creating an arts and culture commission in the City of Lemon Grove will be a catalyst for developing and strengthening arts community enhancing cultural tourism.”

If you are interested in forming an Arts & Culture Commission you can email the City Council members and/or email Watson at wreklesswatson@gmail.com

Abraham Muheize spoke about our newest minor league basketball team, the San Diego Kings. You can sign up for their newsletter at www.sdkingsbasketball.com

Council meetings are a great time to voice your opinion in front of our local lawmakers. The Lemon Grove City Council meets the first and third Tuesday of each month at 6:00 p.m. at the Lemon Grove Community Center, 3146 School Lane in Lemon Grove.