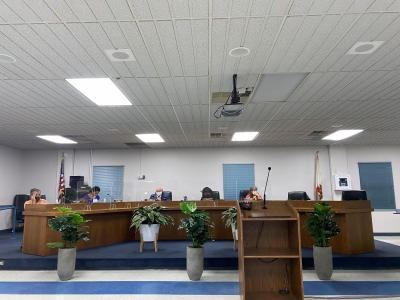 By Angela Kurysh
June 24, 2021 (Lemon Grove) – Despite a policy set over a month ago to keep City Council meetings in Lemon Grove to three hours or less, the most recent meeting on Tuesday, June 15th, started at 6 p.m. and adjourned at 10 p.m.  Hot items included approval of an ordinance to allow a broad range of cananbis businesses and name a new city manager.
Although there were many items on the agenda, including the interviews and appointment of the City’s new Planning Commissioner, Council was not able to go over every item, due to time constraints.

Conducting interviews to appoint the new Planning Commissioner took up a majority of the meeting. Eight candidates were each given three minutes to justify why they would be the best fit for the role. Councilmembers gave candidates two minutes to respond to Council questions.  With a 5-0 vote, the Council appointed Emily Jacobs to be the new Planning Commissioner for the City of Lemon Grove. Her term will last  four years.

Expanding recreational cannabis in Lemon Grove has been an ongoing conversation at many of the City Council meetings. Community Development Manager Noah Alvey conducted a public hearing to introduce an update to the Medical Marijuana Ordinance (Title 17) and delete Chapter 8.64 (Title 8) of the Municipal Code. By amending the Municipal Code, it would allow commercial cultivation, manufacturing, research and development in the Light Industrial Zone (LI Zone). It would also allow approved dispensaries to add manufacturing, research and development in the LI zone with a minor use permit.
Deliveries are still prohibited, but by adopting the new ordinance, delivery will be allowed from approved dispensaries; dispensaries outside of the City of Lemon Grove can also deliver within the city, and distribution  is allowed for authorized uses.
By a 5-0 vote, the Council approved this ordinance, as suggested by the City’s development team. Alvey emphasized that the ordinance is subject to change and could be amended over time, since these are the first steps being taken for the allowance of more recreational marijuana dispensaries within the city.
Administrative Services Director Molly Brennan presented the Fiscal Year 2021-2022 Consolidated Operating and Capital Budget. The Council was presented with six recommendations to adopt resolutions for approving the following:
By a 4-1 vote with Councilmember Liana LeBaron opposed, all six suggestions were approved by the Council.