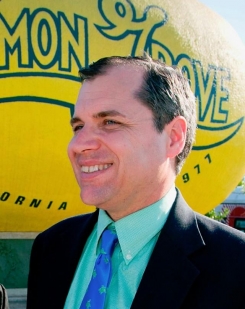 By Miriam Raftery
August 12, 2019 (Lemon Grove) – For years, Lemon Grove has been struggling financially. Now, a group of residents led by former Councilman George Gastil is gathering signatures on a ballot initiative to raise Lemon Grove’s sales tax by three-quarters of a cent, an action the “Vote Yes for the Lemon Grove Tax” committee estimates would raise approximately $3 million.
Lemon Grove is geographically small and has many low income residents, so its property tax revenues are lower than surrounding cities. The city has no shopping mall and doesn’t have a large number of big-box retailers or car dealers to generate sales tax, ether.
Around 80 percent of revenues go to Sheriff and fire services to protect public safety, leaving only 20 percent to fund everything else, such as road repairs, parks and recreation programs, and services for the homeless. There’s little or no fat left to cut; in recent years the city even eliminated its recreation department, though retained some recreational services moved to a different department.
Residents have been clamoring for more money to be spent on traffic control, fixing potholes, increasing law enforcement patrols and addressing the homelessness problem, among other things. But there’s not enough money to do so.
The measure would raise Lemon Grove’s sales tax to 8.5 percent, the same as La Mesa’s. El Cajon has an 8.25 percent sales tax and Santee is the lowest at 7.75, the same as Lemon Grove’s present rate.
The city faces a $400,000 deficit by the end of next year, which is projected to reach nearly $1.2 million by 2022.
“I survived two budget crises when I was on the City Council, and I really don’t want to see another,” says Gastil, who served on the Council for 10 years and the Lemon Grove school board before that. He is planning to run for a Council  seat again next year.
Gastil told the San Diego Union-Tribune, “If people want the fire department and the Sheriff’s department to be able to help them when they need it, we have to find a way to pay…If people want programs at the rec center and to keep the parks clean, these things cost money.”
The group needs 1,489 valid signatures to qualify for the March 2020 ballot and is aiming to collect 3,000.
Last year, the Lemon Grove City Council considered two sales tax measures, one a half-cent general sales tax increase, the other an increase on business license fees and a new tax on marijuana dispensaries. Both required a supermajority of four votes but failed 3-2, with Council members Jerry Jones and Matt Mendoza voting no.
Jones, in a 2018 interview, said he objected to asking voters to  “give us your money and trust us” on how it would be spent. He wanted to see a survey of the public before approving any new tax measure.
Those supporting the initiative including Mayor Racquel Vasquez and Councilmember Jennifer Mendoza, who says funds will be spent on law enforcement, cleanup, and seeking matching grants for projects such as sidewalks, parking lot improvements and economic development that might bring a hotel to Lemon Grove that could generate revenues for the city.
The principal proponents of the initiative drive also include Jay Bass and Yadira Altamirando as well as Gastil.  Other organizers include Katie Meyer, Yajaira Preciado and Kamaal Martin.
Not everyone supports the effort.
“I am not in favor of the increase and we need more fiscal responsibility from our leaders,” Teresa Rosiak-Proffit, who ran unsuccessfully for the Council in 2018, told East County Magazine. “Our merchants are already suffering and consumers already go out of Lemon Grove with their spending, so this will happen even more.”
Rosiak-Proffit, who has previously advocated for more economic development efforts to bring new businesses into the city, adds, “Our residents are just barely making it  now and their voices should be heard. Why give more money to the people that are misusing the money they already have been given?”  she says. Rosiak cited litigation involving the city that she says is unnecessary.  “Attorney fees are mounting and that is wasting our tax payer dollars,” she adds.
A citizens’ oversight board is planned if the initiative is successful, organizers say, to assure that funds are appropriately spent on projects that meet with the approval of the public and Council.
The city’s financial straits have become so dire that there has been talk of disincorporating as a city and exploring whether the County could take back control of Lemon Grove, meaning it would revert back to unincorporated status. It is unclear whether the County would even accept the financially struggling community, however.
The relatively young city recently celebrated its 40th anniversary. But how much longer it can survive may hinge on voters’ decision at the ballot box – if the initiative gets enough signatures to qualify.
City Manager Lydia Romero is relieved to hear of the initiative effort to help Lemon Grove succeed and thrive for another 40 years. She told the San Diego Union-Tribune, “This restores my faith in this community.”