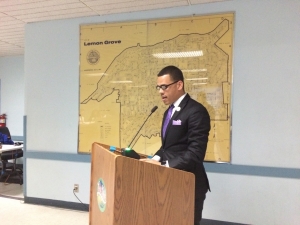 May 19, 2017 (Lemon Grove) -- The Lemon Grove City Council voted 3-2 to support, with additional amendments, Assembly Bill 805 authored by Assemblywoman Lorena Gonzalez Fletcher, which gives San Diego and Chula Vista more power on SANDAG, the regional transportation body in San Diego County.   The key change sought would allow chairs and vice chairs of SANDAG to include leaders from any city in the region, not just San Diego and Chula Vista.

In response to an audit that showed SANDAG over-represented by $4 billion the amount of revenue Proposition A would have collected, AB 805 calls for an independent auditor and auditor committee to track SANDAG’s budget and follow-through.  But more controversially, it also shifts the balance of power on the regional board.

In wake of two court rulings that SANDAG has not properly addressed California’s greenhouse gas and pollution targets, AB 805 allows the Metropolitan Transit System (MTS) and the North County Transit District (NCTD) the power to go to voters to seek additional funding and gives more power to the regions two largest cities by allowing a weighted vote that essentially allows San Diego and Chula Vista to determine major policy decisions, given their large share of the county’s population.

Councilwoman and Mayor Pro-Tem Jennifer Mendoza spoke in opposition to the portion of AB 805 that dictates only the Mayors of San Diego and Chula Vista can serve as Chair and Vice Chair of SANDAG. “That would be like telling you (Gonzalez-Fletcher) that you could never be Speaker of the Assembly, now I don’t know if that’s something she wants, but that only someone from Los Angeles or San Francisco could serve as Speaker.” Former Lemon Grove Mayor Mary Sessom has chaired SANDAG twice under the current rules that allow representatives from any city with the county to serve in the top spot.

Councilman Jerry Jones is Lemon Grove’s SANDAG Representative and voted no, along with Councilman Matt Mendoza.  Jones has been a vocal opponent of the measure. “This is not a north-south thing,” Jones said, in response to SANDAG being criticized as putting too much emphasis on freeways in north county over public transportation in the county’s urban core.

He added that North County cities and communities “have gotten a lot of funding for their freeways but the reason for that is that they grew so fast, primarily in green field areas where there were no freeways in the past. The southern part of the county already had its infrastructure because it grew very slow over time.” 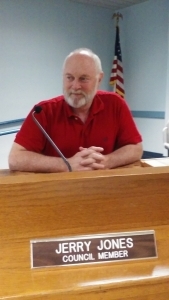 Jones continued, “In terms of funding from SANDAG… East County does not get its proportionate share of funding, but believe me if we were going to wait for San Diego to give us whatever scraps they want off their table, it ain’t going to happen.”

Jones covered the voting system as it is now. “It’s a weighted vote and a tallied vote at the same time. So when you press your button at SANDAG your vote comes up all at the same time. San Diego has 40 votes and there are 100 total. Under the proposal, they would go to 42. For an item to pass at SANDAG it has to pass both the tally and the weighted vote. What that means is that if it fails one, it fails. If it fails the tally vote it fails. If it fails the weighted vote it fails. So what that does is that no one can call for a weighted vote and force their weight on the vote. So what that means is it creates an environment of consensus building. You come up with something that will work until it works. That way the big guys don’t dominate and the little guys get the chance to be heard and to form their coalitions.”

The weighted voting system as called for under AB 805 has already been amended based on feedback from smaller cities. In the bill’s new form, in order for a weighted vote to occur, one city’s representative on SANDAG can call for a weighted vote but three other cities must sign on in order to take a weighted vote over a tally vote. However, under their vote on Tuesday, Lemon Grove is asking for further revisions. (See below, after public comment section)

During public comment on the item, nine speakers voiced support for AB 805 as it stands, with none opposed.

La Mesa Councilman Colin Parent, the lone vote against opposing AB 805 in the City of La Mesa, spoke, saying , “The way things are structured right now, ask who are our allies?” suggesting that San Diego is a better friend than all the cities in north county that critics say dominate SANDAG under the current system.

Tom Lemmon, Business Manager at the San Diego Building & Construction Trades Council, said, “SANDAG as currently organized is problematic for real communications, real understanding and clearly transparency. It’s an organization that we see time and time again doesn’t do the right thing for workers and for that reason and for that reason alone, you being representatives of community of workers should be thinking about how SANDAG treats the people who work for it.”

During Council deliberations, Councilman David Arambula delivered prepared remarks in support of AB 805 in which he argued that North County is overrepresented on SANDAG and that a system in which San Diego gains more clout on SANDAG is a win for Lemon Grove because it shares so many transportation routes with San Diego, including Highway 94, the Orange Trolley Line and three bus routes.

When it came time to take action on the item, Arambula motioned to support the bill with amendments. This was followed by a brief pause after which Jones motioned to oppose the bill until amended.

The City Attorney had advised that if the Council really wants their amendments made, that they should be listed as opposed until amended.

Ultimately, the Council voted 3-2 (Arambula, J. Mendoza, Vasquez yea, Jones, M. Mendoza no) to support AB 805 Gonzalez-Fletcher with amendments to the Chair and Vice-Chair under PUC section 132 352.3 and voting structure under PUC code section 120 102.5. Lemon Grove would like the Chair and Vice-Chair positions to be open to the representatives from the smaller cities, and for there to be further revisions to the voting system.

Based on the current vote, the legislative record in Sacramento will now list Lemon Grove in Support, despite their call for additional amendments, with no assurance that their proposed amendments will be made.

This reverses a previous resolution to oppose the bill, before a series of amendments which the Council majority says is enough for them to lend their support to the bill, subject to additional amendments. City Manager Lydia Romero said more amendments could most likely happen after the bill clears the Assembly and be incorporated into the bill at the first committee this is referred to in the State Senate.

Also at the meeting, the Council voted to ban alcohol and marijuana in Lemon Grove parks and limit park hours to dawn till dusk.

Only glass containers had been banned; cans of alcohol were still legal. Councilwoman Mendoza asked about allowing alcohol under event permits for an additional fee, like other cities. Romero advised that some people forget their permits and this would create a hassle for law enforcement and that alcohol consumption would be more appropriate under building rentals from the City.

Under state law smoking marijuana is technically banned where smoking cigarettes is prohibited. However, Romero states explicitly banning marijuana makes it easier from an enforcement perspective. Additionally, it bans all marijuana products, not just smoking.

On park hours, Councilwoman Mendoza voiced concern that during the winter when it gets dark at 5:30, parks would be closed before some people even got off work. Additionally, she said she helps organize walks for a group that under the new law would technically be illegal during certain parts of the year. Furthermore, she said there are people who gather to exercise their dogs and that this would make it illegal in the winter.

Six residents had spoken in favor of the recommendations with none opposed. No changes were made by any Councilmembers and staff’s recommendations passed 5/0 without any amendments.