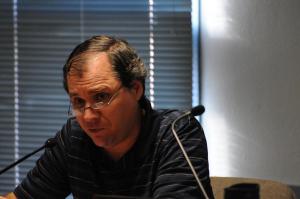 The high court ruled in 2010 that corporations had a right to virtually unlimited campaign contributions.  Allowing companies to inject massive amounts of money into the political system has led to some of the most expensive elections in American history.

The effort was led by Councilmember George Gastil (photo). Before speakers from both Common Cause and Money out of Politics addressed the Council, Gastil went into some of the problems with the decision, which could ultimately impact municipalities such as Lemon Grove.

The resolution was brought before the Council by Money out of Politics San Diego and San Diego Common Cause.

According to Gastil, the major issues with Citizens United are two-fold since the court ruled that “corporations are people, and it does not hold corporations to the same level of scrutiny” as citizens. Gastil also said that City Council was the level closest to the people, and that his goal was for the Council to join other cities (50 in California so far) and 17 states that now support the measure.

Pam Page from Money out of Politics told the Council that corporations can “spend undisclosed amounts of money.” She added, “Corporations are not people.”  Page testified that it is unfair for the richest to have the most say in the system, due to their access to money. This is not, she reminded the Council, a partisan issue. Citizens United is not popular with either Tea Parties or Progressives.

There are 50 cities in California and 500 around the country that have joined this movement. In California, five boards of Supervisors have joined as well. So has the state of California.  The first state to pass a similar resolution was Hawaii. 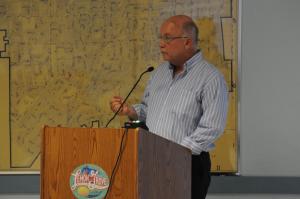 Simon Mayeski of Common Cause came next (photo, right). He told the Council that he has worked as treasurer in campaigns. “I believe in the political process,” he told them.

Mayeski also added that Lemon Grove was a town where small businesses were the rule, and small business people did not like Citizens United, overall.  The reason is the undue influence a lot of money can bring to the process.

Dianne Lane told them about the City of Fullerton, which is larger than Lemon Grove, but smaller than San Diego. In June 2011, she recalled, a local businessman Tony Bushala poured $250,000 into a recall campaign that ousted from the Council three long time servants, Dick Jones, Don Bankhead and Pat McKinley, who were recalled for their perceived support of the Fullerton Police Department after the beating death of a homeless man.

Lane told councilmembers that there is no way the average city council member could fight deep pockets if special interests decide to target them.

Council Member Racquel Vasquez told Council that she was ready to “join the other 50 cities and five Boards of Supervisors” in voting for the resolution.

Council Member Jerry Jones said that “I have never been a fan of big corporations.” But this was not about big money, and big money was not able to buy campaigns every time. He mentioned the election in Chula Vista where indeed big money did not buy that election.

“My issue is that we don’t have enough information.” He also said that while money is not speech, “for a party money is speech.” Also for him this was not the job of the City Council, and it was a distraction. Howard Cook echoed his feelings that they had not enough information to be able to vote on this.

Gastil said that he  has been following the issue closely. He also said that political parties are treated differently under the law than corporations. There is not a cent the parties can spend that cannot be accounted for. He said that he will lend his name to the effort.

Mayor Mary Teresa Sessom was the last speaker. She said that she was torn on the issue, but that the Fullerton story reminded her of the recall of Mayor Davis, where very wealthy individuals brought a lot of money to bear into that campaign.  She also added, that “I don’t trust Congress to pass an amendment in my lifetime.”

She opted to abstain on the issue since there were two sides to it and she felt there had to be a better way to tackle the issue.  After some back and forth between Sessom and Gastil, they both agreed to table the issue for a later date.

Outside Mayeski told ECM that “It was better that it was tabled than defeated.” In his mind they were given an opportunity to modify the proposal, “hopefully with their help.”

He added that supporters learned a lot of the arguments and the issues that people have about the arguments. Mayeski indicated that perhaps they need to be more clear in the future.