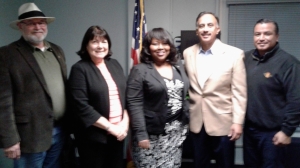 City Councilman Jerry Jones told East County Magazine, “The idea of the MOE (memorandum of effort) is that as we get extra money for streets that we don't reduce our general fund expenditures because of the new money. That's called supplanting. It's kind of like matching funds.”

Councilman Matt Mendoza asked staff what would happen in the event the gas tax is repealed. He was told by staff that if that happens, the city will still have spent the money on the streets, but not the full amount from the gas tax that enticed it to spend the extra money.

On Tuesday, the Lemon Grove City Council voted to take a $179,000 advance from the County of San Diego on Community Development Block Grant (CDBG) funding. All the CDBG monies were allocated to road maintenance.

The risk on the advance from the County is that if the CDBG ends up on Congress’ chopping block for elimination as is being discussed, Lemon Grove will have to reimburse the County for the advance out of the general fund.

But those leveraged funds are questionable. A measure to repeal the gas tax is moving forward and appears likely to land on the 2018 ballot, and block grants may be eliminated by Congress.

On the gas tax, Jones says “The new money we'll see from the new gas tax, once ramped up, will at least triple our annual road budget.  Like most I’m not crazy about the new tax but I am excited about what it will do to improve our streets.”

On the tax, Councilman David Arambula told East County Magazine, “For municipalities like Lemon Grove, it dramatically increases the city’s budget to improve our deteriorating streets.”

Mayor Racquel Vasquez said at Tuesday’s meeting, “As you know, with residents and business owners here in Lemon Grove, our streets are a priority for them.”