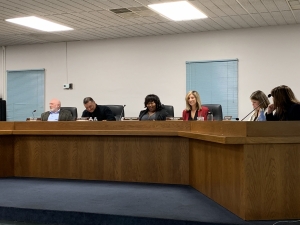 March 11, 2019 (Lemon Grove) –  The Lemon Grove City Council conducted business this week in the absence of Councilmember Matt Mendoza. The remaining four councilmembers received annual updates from fire and police. Additionally, the Council discussed at length the possibility of adding a local ordinance regulating inflatable jumpers as soon as this summer.

Heartland Fire Chief Steve Swaney presented to the Council covering a range of topics and sharing important statistics for the city of Lemon Grove.

Ninety percent of calls were responded to within six minutes. Emergency responses were slightly up last year compared to the previous two years. Notably, over three-fourths of the incidents were for medical aid. Swaney indicated their call triages system, implemented in 2016, helped in prioritizing responses. This system results in medic-only calls where no fire engine is sent, saving resources.

Swaney elaborated on the various fire prevention activities they have worked on: fire inspections of hotels and schools, plan reviews for new and ongoing development, weed abatement inspections and notices, as well as school safety fairs and open houses.

Highlighting the success of the Explorer Program, Swaney stated that many local area Emergency Medical Technicians (EMTs) are trained through the program and eventually hired on with the department. Councilmember Jennifer Mendoza made sure those being trained were local to East County.

Mendoza also inquired about troubling statistics dealing with firefighter and first responder suicide rates. Mendoza paraphrased her research, indicating that suicide rates exceeded line of duty deaths. Swaney emphasized cutting-edge mental health awareness which started two and a half years ago. Those preventative efforts are being replicated in other departments.

Mayor Pro Tem David Arambula scrutinized whether there was a maintenance plan for palm trees along the trolley tracks, emphasizing an incident from last year. Swaney specified that the palm trees are on Metropolitan Transit System (MTS) property, but that they would inspect the situation as fire season approaches. Swaney did not mince words: “If you don’t want fire, get rid of your palm tree or keep it well maintained.”

In reference to fire safety, Mayor Racquel Vasquez appealed for the return of the goats because “people love the goats.” The goat program, run by Heartland Fire and Rescue, contracts goats to clear brush which may otherwise serve as fuel for fires. (View our video: running of the goats in Lemon Grove in 2011.)

Notably, vehicle crime was down 10 percent from the previous year. Amos stated that this type of crime was difficult to control because it’s “low risk and high reward.” To combat this, Amos highlighted their information-led policing model which tracks previous offenders, asserting that the recidivism rate is high amongst this population.

Incidents initiated by deputies increased substantially in the last calendar year. These are incidents where the deputies were not called to the scene. The decrease in crime, Amos asserts, is a result of the department’s proactivity through these deputy-initiated incidents.

However, in the last quarter of 2018, the Crime Suppression Team (CST) was moved to other Sheriff’s stations. Amos posited that this reallocation of resources resulted in a“slight increase in larceny theft cases in the Lemon Grove commercial district.” Amos was hopeful that two new CST deputies would be allocated back this April.

Mendoza inquired about resident’s perception of the city as more crime-ridden when in fact “crime is going down in Lemon Grove.” 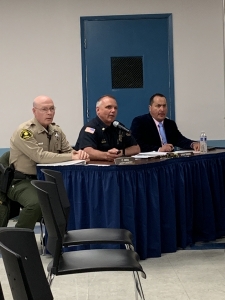 Councilmember Jerry Jones questioned the dramatic increase in car thefts during the months of June, per the data Amos provided. Amos attributed the increase to joyriding. Amos stated many car thieves steal cars as an alternative to taxis and abandon the car shortly after.

Home Depot was the site of the most theft crimes in the city. Amos advised that CST deputies were more proactive with businesses in order to combat theft. Deputies talk to management and loss prevention officers to build relationships and streamline confrontations with suspected criminals. Amos emphasized that when CST deputies work with business, criminals are arrested rather than cited. This helps reduce crime and word gets around to not steal in these areas because there will be jail time. Jones inquired about the costs of hiring more CST deputies, indicating his preference because of their flexible schedules, effectiveness in the community, and lower costs.

Resident Branda Hammond lauded the efforts of police but emphasized “a lot of stuff doesn’t get reported” indicating that there were “some of the same homeless people doing the same stuff.”

Council heard a staff report and provided feedback on language for an ordinance regulating the use of inflatable jumpers in city parks. Commonly referred to as “jumpies” or bounce houses, these are generator-run plastic structures of various shapes and sizes.

Assistant City Manager Mike James presented on the matter. Last year, Council asked staff to review the use of inflatable jumpers in Lemon Grove parks and come back with ideas, benefits, and drawbacks to regulation.

During the summer, James stated, there are several inflatable jumpers in the parks, usually on the weekend. The city’s insurance brokers were in favor of some type of program to limit their occurrence or at least streamline an applicable process.

Along with limiting the number of inflatable jumpers, the ordinance would likely produce a limited list of vendors applicants would be encouraged to use, based on business license and insurance requirements.

James noted the issues of jumpers in the park is cyclical, so an ordinance may not be needed. There would be an increase in staff time to administer and enforce the program.

The discussion on the need for an ordinance centered on damage to city property and the loss of the quiet use and enjoyment of the park due to an oversaturation of inflatable jumpers.

Mendoza commented on the excess noise from the generators used to inflate the jumpers. People “are having a party. So, they put the loud generator as far away as possible,” Mendoza reflected on her experiences with inflatable jumpers in the park. She stated when there are five of these jumpers in a single park it “gets pretty loud.” Mendoza spoke in favor of creating an ordinance to regulate jumpers because “if you want a generator, put it next to your party.” She also commented on the fumes from gas as a cause for concern.

Vendors also set up and leave the jumpers all day, which may cause hazards, Mendoza reflected. “Eventually, generators run out of gas.”. When the generators stop, the jumpers “immediately collapse,” and if you have small children “good luck getting them out.” Mendoza described one incident where she saw three children engulfed by the collapsing plastic jumper. She described it as “terrible” and “frightening.” This is why she is in favor of an approved vendor list as part of the final ordinance.

Jones also spoke in favor of moving forward with ordinance language. Jones suggested a fine rather than require non-applicant parties to tear down their setup because “I don’t want to ruin a kid’s birthday party because the parents are idiots.” Because of the increased activity during the weekend, Jones suggested a weekday and weekend application fee schedule.

In discussing a timeline for approving such an ordinance, Vasquez and staff thought ordinance language could be presented to Council in May with the ordinance going into effect during the summer.

The Council meeting was adjourned so council and staff could discuss two items during closed session.

The first item dealt with negotiations concerning a property on the 3600 block of Olive.

The second item was a discussion of existing litigation in the matter of City of Lemon Grove v. The Grove Collective, et al., a case filed in 2016. Per court documents also dated March 5, 2019, judgment was entered for the City of Lemon Grove against several of the parties for sums ranging from the $336,000 range up to $1.5 million. A motion hearing is set for April 12 at 9 a.m.