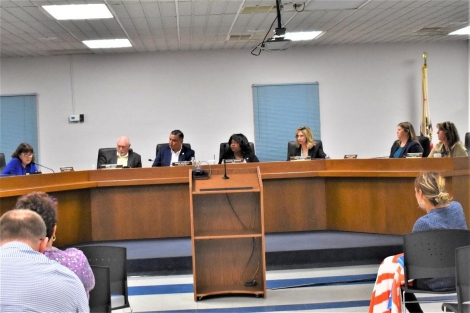 Lt. Rand said the department has begun the process of community awareness of a video sharing platform named “SafeSanDiego.” The first community forum in Lemon Grove was held on Oct. 3.  Businesses, government agencies and residents will be allowed to share video with law enforcement to help authorities investigate and solve criminal cases.

“Our goal is to improve urban safety,” said Lt. Rand, who added that the city already has many businesses with cameras in place. The Sheriff’s department would incorporate those existing videos into a platform that is visible to law enforcement.  Rand stated that when the Sheriff’s office needs that video information, it has contracted with Genetec to federate that video. Residents will be given the option to add their videos to the system, too.

“A lot of people have surveillance systems,” he said. “We are going to allow the community to federate that video with law enforcement. Ring already has a platform that makes that possible.”

Councilmember Jennifer Mendoza questioned if there was a “Big Brother” aspect to the program.   “This isn’t like someone sitting at a desk, like Big Brother, with all these screens of all the videos of where all these cameras are---watching people?” she asked. “That might worry people.”

“That is not our plan,” replied Lt. Rand.

However, Mendoza noted that the cameras may be helpful in detecting and dealing with crimes and crime prevention.

Rand emphasized that participation by businesses and residents will be voluntary. “We will be going business to business asking people to join us,” he said.

Currently the locations of cameras are slated for City Hall, Promenade Park, Skate Park, the intersection of Massachusetts and Broadway, and participating businesses.

Discussion on LGMC § 9.08.100,  a proposed ordinance on election signs was presented.

City attorney Kristen Steinke introduced different elements of the proposal to introduce an application that must be filled out before campaign signs can be distributed.  https://www.lemongrove.ca.gov/home/showdocument?id=6767

This code currently only applies to candidates running for a city council position.

But Mayor Racquel Vasquez suggested it should apply to school boards and other races.  “It should be fair and equal across the board,” she said.

“That would require an additional code,” said Steinke.

Discussion was also held on a proposal to distribute a map of where signs can or cannot be displayed in the city.

“Can we bring it back? Can we look to see what other sister cities are doing?” suggested Jerry Jones on possible amendments.

During the course of the meeting a proclamation recognized Fire Prevention Week.

Mayor Vasquez also recommended those interested in learning more about the city’s deficit read the San Diego Union-Tribune article at https://www.sandiegouniontribune.com/communities/east-county/story/2019-09-28/why-would-a-city-not-want-to-be-a-city-anymore . A petition backed by a citizens’ group, but opposed by some in the business community, has been circulating in an effort to get a sales tax increase initiative onto the ballot.

“This structural deficit is the fact that this city is not bringing in enough money to cover the cost to operate,” said Mayor Vasquez.  “It’s a revenue generating deficit.”

I don't want more cameras tracking my every movement. Do you want to live in  a Police State like Russia or China? It is like someone sitting at a desk watching everyone.