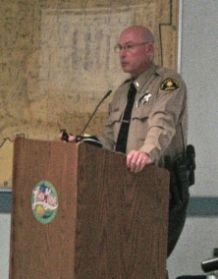 Sheriff's Lieutenant Amos (photo, left) reported an uptick in crime up between 2016 and 2017, mostly due to a couple serial offenders in the first third of 2017 that increased the average for the entire year. Crime was up countywide on average by about the same amount.

Lemon Grove's increase in 2017 is mainly attributable to a couple of serial offenders who were eventually caught.  In January and February of 2018, crime is back down to rates much lower than at this time last year. The Lieutenant also called on the public to report suspicious activity.

The number of arrests, and impressive up-tick in identification and apprehension of suspects, is in large part due to officers helping storekeepers catch thieves as part of its recently piloted and newly launched crime suppression team, said Amos. Officers give storekeepers their cell phone number to report thieves and the officer apprehends the suspect with the stolen merchandise, at the door.

Fire Chief Colin Stowell announced that Heartland Fire and Rescue had a rseponse time of under six minutes 90% of the time, for an overall average of 5:07 minutes in Lemon Grove. Heartland has completed an application for $147,000 from FEMA for a wellness program for firefighters. “Those successful wellness programs are not only protecting your employees they are also helping their longevity. Cancer rates are higher in firefighters, this is a concentrated effort not just locally but nationally as well,” said the Chief.

Other 2018 Heartland priorities include:

A suggestion was made to have Lemon Grove Family Health Center route its EMT calls outside of 9-1-1 calls because it represents 4% of Lemon Grove's call totals. Jones asked, “The high call volume to the one address concerns me a little bit… is there anything we can do to change that behavior?” to which Stowell replied that a separate contract with an ambulance provider would be needed.

Vasquez and Councilmember Matt Mendoza thanked Amos and Stowell and requested they relay their gratitude to the deputies and firefighters.

and the City held public hearings on:

John L. Wood, a resident, voiced concerns over a claim filed against the city alleging that Councilman David Arambula assaulted and seriously injured a medical marijuana dispensary advocate in a meeting at his home. The city denied the claim; Arambula has claimed self-defense and said he was not aware that Williams wanted to discuss dispensaries prior to the meeting. (See our prior coverage here.)

Wood asked, “Why would anyone think it would be a good idea to have a meeting with a person that wanted to start a very controversial business outside of a public forum? It's called common sense…Anytime you are having a meeting you should check with the city attorney to see if it's appropriate. If you plan on running, find out what your responsibilities are.” 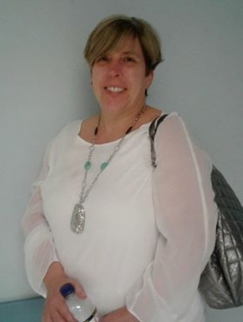 “I now ask City Council official Jerry Jones, City Council officials Arambula and Mayor Racquel Vasquez and City Manager Lydia Romero to resign as my confidence in each of you as our city leaders has been compromised and I am concerned that you cannot fully do the job to the best of your abilities for the residents of Lemon Grove.”

Vasquez was listed on Williams’ claim as a potential witness but has declined to comment on the case.  Arambula and Vasquez are registered Democrats; Jones is a former Republican who recently changed parties to decline to state, the San Diego Union-Tribune reported in October 2017.

Rosiak-Proffit also referenced a case involving Jones and Romero vs. Marcus Bush in which she said the City's insurance policy paid $15,000 to an alleged retaliation victim. ECM has asked the city manager for confirmation and a copy of the settlement agreement, who said she forwarded our request to the city attorney, who thus far has not responded.

Bush, a progressive activist, worked for an engineering firm doing business with Lemon Grove when he filed a civil rights lawsuit claiming Jones and Romero squelched his free speech rights by notifying his employer about comments he posted on Facebook critical of the city’s stance on a legislative measure to reorganize the San Diego Regional Association of Governments. 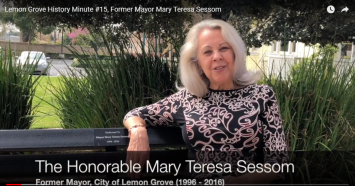 Former Mayor Mary Sessom spoke in the Lemon Grove History Minute, marking Lemon Grove's 40th birthday, about the General Plan, and her impact on it and its impact on the City as Mayor for 20 of its 40 years. She talked about disappointment with the lack of progress on the buildings and/or businesses in the same General Plan area as Home Depot, but her satisfaction with the downtown district.

Lemon Grove HEAL (Healthy Eating, Active Living) Zone Program Manager Anita Lopez said that her group's two million dollars worth of work should also be taken into account if that would help the city win grants.

One bright spot in the meeting came when Councilwoman Jennifer Mendoza noted that SB1 (the gas tax) has doubled the amount of money that Lemon Grove has for paving streets.

LG finally repaired some broken pavement on my street, I complained for months. It was a traffic and safety hazard.

There was a spike in crime in Lemon Grove in early 2017, but we caught the serial offenders responsible for the spike, and they're in jail, and crime is back down again, reported Sheriff's Lieutenant Amos, at Tuesday's Lemon Grove City Council meeting.

Why did nobody ask about the drug dealers (plural) that are always behind the Goodwill store on Lemon Grove?